You are here: Products Deadlocked by Dawn by Afton Locke 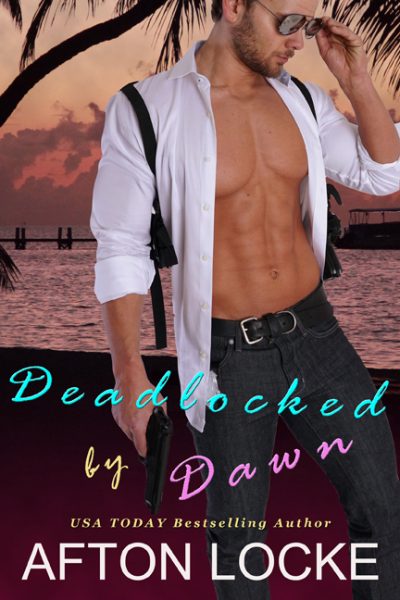 Deadlocked by Dawn by Afton Locke

Paradise in the Florida Keys…

After 2020, Delia Sloane struggles to keep Rainbow Falls Resort afloat while grieving the loss of her father and husband. She refuses to let her Key Largo slice of paradise—a haven for non-mainstream couples—die. But when a serial killer begins attacking her guests—leaving a single dreadlock on each victim—everything spins out of control, including what’s left of her family.

After her brother’s experience with police brutality, the last place she wants to turn to for help is law enforcement. Scarred mentally by a deadly force incident, Detective Will Peterson has avoided homicide cases. But only he has the skills to drill into the elusive killer’s twisted mind.

And it just got personal…

When a hurricane strikes, exposing the horrible truth behind Delia’s losses and threatening everything she holds dear, trusting Will may be her only hope. Are they up to the challenge?

Afton Locke is a USA Today Bestselling Author who prefers romantic fantasies to everyday reality. Fantasies take her to different times, races, places, and beyond. She lives with her husband, several unnamed dust bunnies, and a black cat that can be scary or cuddly, depending on the current book. When she’s not writing, Afton enjoys hiking, cooking, reading, and watching retro T.V.

I was inspired on a trip to Barbados. Sitting on the beach, I admired the turquoise water and men with dreadlocks. I'd been reading suspense for a while but hadn't written one yet. At that moment, I knew I wanted to write a murder mystery set in the tropics, centered around a dreadlock. I filed it away in my ideas file. The whole plot idea didn't come to me until the following year, when I was isolated due to the pandemic.

They climbed the metal staircase and arrived at her door. Her hand trembled as she swiped the card key and opened it.
Will’s eyes looked electric blue in the semi-darkness, burning into her soul.
“Would you like me to come in?” he asked, his voice so husky she could barely understand him.
The throbbing magnetic pulse between them was much easier to comprehend.
She answered by grabbing his hand and pulling him inside. While he closed the door, she turned on her pineapple-shaped lamp, nearly knocking it over. She felt as if she swam underwater as he looped his arms around her waist. She locked her own behind his neck, exploring the crisp texture of his hair while they kissed again.
His hot tongue explored her mouth, making her melt at every joint, especially between her legs. The olive pantsuit she wore seemed to catch fire as her skin ignited with desire. Was it chemistry? Or the danger?
Stop. They had to stop.
She wrenched her mouth away. “I-I haven’t been with anyone since Keith.”
“There’s been no one since Amy, either.”
“Then why are we here?” she asked.
He brushed his knuckles down her cheek. “Because we need each other.”
Maybe if she hadn’t heard about the video of her father, she wouldn’t be so emotional right now. So vulnerable. It felt as if a dam had broken inside her, washing away all her control.
Every pain she’d ever suffered bubbled to the surface—Keith’s drowning, Jamal’s injury and imprisonment, her economic problems.
The force of it flooded her. Made her grab the lapels of his blazer and wrench it off. As if joining with him would cure every pain she’d ever endured. Wildness and pain filled his eyes, too. He grabbed her hips and slammed them against his pelvis. Against his steel-hard desire.
She kissed him until her lips bruised. Until the pain mixed with the losses screaming and aching inside her.
“Where’s your bedroom?” he asked, breathing hard against her cheek.
She cupped her hand over the swollen ridge behind his zipper. “We’re not going to make it that far.”