You are here: Products Day of the Phoenix by Neal James 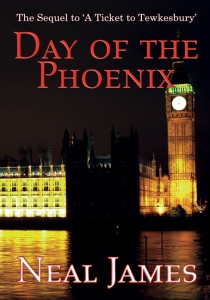 Day of the Phoenix by Neal James

Steve Marshall was ready. This time there would be no mistakes – no-one to derail the plan, and no-one to step outside his ideas for the perfect Britain.

Anyone standing in the way of progress would be unmercifully mown down. Infiltrating the British Democratic Party was the ultimate solution to the establishment of a Fascist state – a state controlled by him and him alone. Robert Grafton, the party’s current leader, was going to be the perfect tool in the fulfilment of a dream, and would be just one more stepping stone on a path reaching back as far as the end of the Second World War.

Marshall had toiled hard and long at the plan since the debacle of 1992. The Organisation had come within a whisker of success, and but for some strokes of outrageous fortune, MI5 and its head, the imperious George Watkinson, would have been all but consigned to history. This time it would be different.

Neal James takes this sequel to ‘A Ticket to Tewkesbury’ into a frighteningly possible future. A future built upon the use of the ballot box to further the aims of a radical political society, and where the lessons of history are all too easily forgotten.

Find out more about Neal James and all of his writing on his website: www.nealjames.webs.com

‘Day of the Phoenix’ is a political thriller in 85,300 words and 44 chapters. It is the sequel to my 2008 novel ‘A Ticket to Tewkesbury’.
The plot timeline runs from 2002 to 2007, the year of the general election in Britain, and picks up where we left Steve Marshall at the end of ‘Ticket’ in 1992.
Steve Marshall had succeeded in ducking below the MI5 radar in the previous book by killing the only person who could betray him – Gerald Montgomerey. We now pick up, ten years later in 2002, at a time when Marshall had accomplished his initial aim, back then in 1992, of resurrecting the fascist plot to subvert the democratic process in Britain.
The plan is simple – by infiltrating the fledgling British Democratic Party (BDP), he and the Organisation plan to take control of it and, by feeding on the fears of the British electorate, gain control of Parliament by winning at the ballot box.
I introduce into the plot Dennis Marks, the DCI from my last book, who is brought into play by MI5 to investigate the activities of Chris Morse, the mole from ‘Ticket’. Morse is the prime suspect in a murder inquiry which then expands to include also charges against the leader of the BDP, Robert Grafton, on a series of related disappearances of key members of his party.
Whilst this plot is continuing, I have George Watkinson, the head of MI5, pursuing his ongoing search for the leader of the Organisation whom he still believes has an active agent operating within the security service.
These are the two main plotlines, but I also develop the main characters’ backgrounds in order to flesh out their roles within the story. Marshall travels to Derbyshire in order to plan the infiltration of the BDP in the Midlands, and runs across an old flame who has links to the political party. This sets the story off on another track which returns to the main plot later on in the story. As the plot thickens, Marshall needs to disappear and ‘dies’ in a car crash in North Yorkshire. Control of the Organisation is then taken over by a ‘new’ character, Adrian Lawson, who drives the story to its conclusion. His identity as Steve Marshall is concealed until the very end of the book, when Watkinson puts all of the pieces of the puzzle together.
Watkinson’s character is also progressed further from ‘Ticket’ as we look more into his private life, culminating in a failed attempt on his life at his Surrey home. His relationship with Solomon Wiseman, the forger featured in earlier Dennis Marks stories, is also brought forward, and the counterfeiter plays a significant role in the merging of the two plotlines.
The concept of the story asks the question of the British public as to how far they would be prepared to go towards the democratic election of a fascist government, and I use factual geographical locations and actual events within the UK during the years 2002 – 2007 to support this proposition.
A large part of the story is set in my home turf on the Derbyshire/Nottinghamshire border, and actual locations and events come once more into play. Names of local towns have been changed whilst retaining clues as to their identities to those with local knowledge. The names of the two major cities (Derby and Nottingham) remain as they are.
The pace of the story is maintained at a fast rate as with my other books, and initial responses from my two ‘readers’ have indicated that this is a highly successful strategy. The chapters are kept deliberately short, in keeping with previous novel styles, as a means of forcing the turning of the page.