You are here: Products Dawn of Fire by C.B. Vaughn 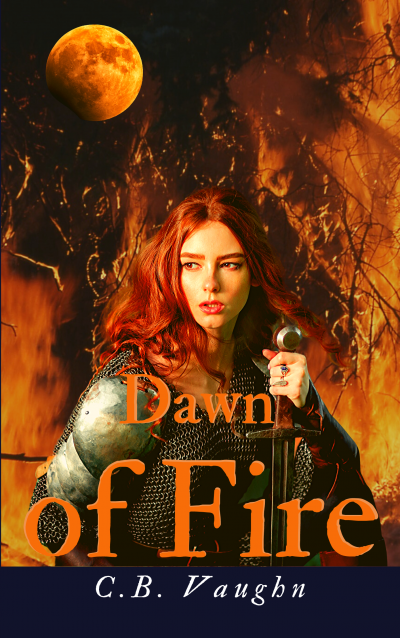 Dawn of Fire by C.B. Vaughn

The ancient and enigmatic continent of Zannondale had seen its fair share of sorrow. Tortured and despoiled by the wars that had devastated its once glittering realms, it still felt the aftereffects centuries later. And now, from far back into the past, a new and more powerful evil than ever is rising, one that threatens to turn Zannondale’s fields to dust and her cities to ashes.

The brutal and merciless Baron Chronus has only one desire and that is to rule over all, no matter what. And for two young men, Dorian and Dain, it means the end of their carefree lives forever. Together with their mentor Julius and the ferocious warrior Kara, the two young men embark on a quest to defeat a shadowy evil, avenge the fallen and uncover long-forgotten secrets of a tragic and hidden past. They have the courage to face the evil that threatens to destroy them, but do they have the strength to defeat it?

Chris Vaughn (C.B. Vaughn) was born in Nashville, Tennessee. He is a former track and field athlete, an avid gamer, and all-around movie enthusiast. He has written several works, ranging from crime, paranormal, fantasy, romance, and horror. His interest in writing was sparked in 2010 after playing the acclaimed game Mass Effect 2, a favorite of his. Popular fantasy series like Harry Potter and the Witcher were inspirations behind his desire to craft entire worlds with unique character interaction. If you’re looking for an adventurous romp with a variety of characters, you’re going to have a good time.

Fire. It is the rawest of the four elements. Both beautiful in its form and deadly enough to scorch all that it touches. It may warm the hearts and bodies of those closest to us or quickly wither away a lifetime of accomplished darlings. Tonight, it chose the latter. A dense cloud of creeping smoke billowed into the sky, bringing with it the unmistakable smell of cinder. Hair-raising wails of the fire’s victims shattered the tranquil hum of the burning city’s nearby forest.
The scent of smoke lingered in the crisp night air, clinging to the foliage like a suffocating fog. A lone girl with hair as red as the fires behind her ran crying along the narrow path ahead of her, stumbling on protruding roots, trying to escape the reach of the angry blaze. The frequent screams of her once-revered friends and acquaintances sent sharp stings of fear pulsing through her, each more painful than the last, as if shedding her very soul. Fighting her mounting exhaustion, the terrified girl forced herself away from the fiery inferno engulfing her once peaceful city one reluctant step and pant at a time. With each wail from the smoldering husk, she cried harder, forcing herself to run faster.
“Find her! Find her now!” A woman’s voice carried in the distance. It was calculated in its tone, yet shaky somehow, at odds with itself. As if feigning strength yet yielding to madness.

Be the first to review “Dawn of Fire by C.B. Vaughn” Cancel reply