You are here: Products Darkness Rising by Lisa Carlisle 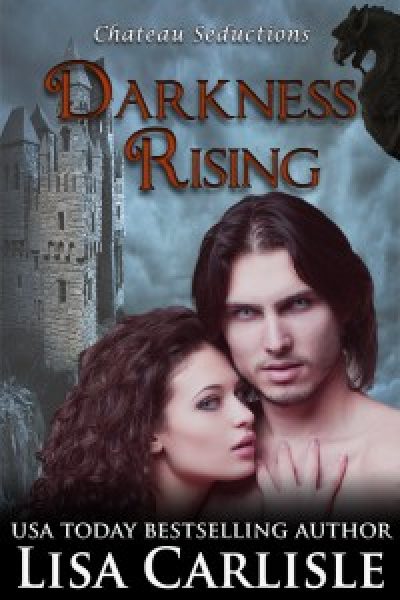 Antoine Chevalier harbors a secret. Born a gargoyle shifter, he wants nothing more than to cultivate his art. His hard work pays off the night he completes his greatest sculpture. But the excitement of his accomplishment doesn’t last.

He’s drawn the eye of the wrong group—a clan of vampires. Antoine wakes into darkness, changed. Shattered. His dream of becoming a renowned sculptor is destroyed.

One question remains—how will he ever survive an eternity of darkness alone?

Darkness Rising is part 0.5 of the Chateau Seductions series by USA Today Bestselling author Lisa Carlisle. Readers have requested more on the dark and mysterious Antoine. In this short story, Antoine tells his tale, which continues in the series with Dark Velvet. Dark Velvet is written from Savannah’s perspective as a newcomer to an art colony who is intrigued by the proprietor.

Lisa Carlisle is a USA Today Bestselling Author of romance and suspense.

I wrote Darkness Rising after I completed the Chateau Seductions trilogy. Readers wanted more about the dark, mysterious owner of the Chateau, Antoine. His story was in my head, briefly mentioned in the other books. I enjoyed writing his unique story from his POV as he’s one of my favorite characters.

Excerpt
Chapter One
Darkness Awakened
Paris, Late 1800s
At last, the sculpture was complete. Antoine studied the finished marble piece of a nude woman reclining with a grotesque figure crouched beside her. Beauty and monstrosity together, the contrast was exactly what he’d aimed to achieve. Others would view it as art, but he and his kind would see it as symbolic of their dual nature.
He examined the artwork with a critical eye one last time before cleaning up his work area in the salon. He’d applied many last touches over several days, but now he was confident it was finished. Tomorrow, he’d scrutinize it one last time before presenting it to his instructor, Rodin, and his colleagues for critique.
He strolled up the winding, cobblestone streets to reach his tiny studio on the other side of the hill in Montmartre. Moving here was the right decision; it had a bohemian mindset, attracting artists, writers, and poets. Perhaps he’d stop for a celebratory drink.
“Why are you here? Shouldn’t you be perched on Notre Dame with the rest of your hideous lot?”
As Antoine spun to face the male speaking, icy shivers raced up his spine. Whoever it was knew his true nature.
The scent of the undead hit his sensitive nostrils with an unwelcome sting. Even in human form, he’d recognize the unique odor of those who feasted on human blood. His kind had fought against them for centuries, before they’d established a truce.
Swishing sounds surrounded him followed by dull thuds of creatures landing on the pavement around him. Over a half a dozen vampires faced him with exposed fangs and red eyes flashing with venom. He was vastly outnumbered.
Mérde.
Their attack was instantaneous. Too quick for him to shift into his stronger gargoyle form. He fought back, bracing his arms against the attackers, but his human body left him at a great disadvantage. It allowed him to blend in with the world of men, especially the art world he so admired, but without his full strength.
Hands threw aside the arm he’d used to shield himself, and a female sank her sharp fangs into his neck. Without his tougher gargoyle hide, they pierced his soft, flesh without resistance. Sharp bolts of pain rushed to the site where she’d pierced him.
“No,” he roared and threw the vampire off of him with a rush of adrenaline, but a male vampire immediately sank down on him, puncturing the other side of his neck. Antoine fought them with all his strength, but they pinned him to the ground and held down his limbs. They penetrated his flesh at various points over his body—neck, chest, upper thighs—covering him like insatiable, bloodthirsty bats sucking out of his life force. The female was back, laughing, before clamping on his neck again.
“Get off me,” he cried, lashing against the attack, but it was futile. “Monsters!”
Terror faded as something far more sensual took hold. He fought against it, knowing it was some sort of vampire magic to lull the victims into submission, but too much flowed into his bloodstream. The pain at the sites where he’d been bitten vanished, replaced by pleasurable sensations that shot straight to his groin.
A different kind of awareness dawned, one entirely unexpected. Despite her flashing red eyes, the female vampire was captivating with flowing black hair and pale skin. The blood dripping from her full red lips excited him.
She stroked his hardening length. “Looks to me like you’re enjoying this every bit as we are.”