You are here: Products Dare to Desire by Samara Dev 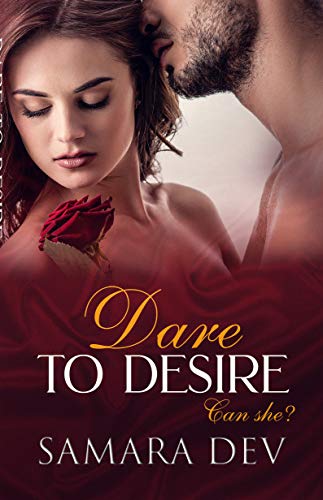 Dare to Desire by Samara Dev

“You know there are many ways to know someone. Talk. Touch. Feel. Taste.”
Ria has known Mel practically all her life. He’s solid, dependable – and her friend. But now she’s wondering if she knows him at all. Her long standing friend is showing another darker and sensual side of his that she finds impossible to accept – and as impossible to resist.

Samara Dev is an Indian origin romance author. She
spends part of her year in North India in the lively culture
of the state of Punjab. She has lived in the South India and
loves to write about all the regions of her country. Her
interest in erotic romance is of recent times and she's still
learning the ropes of true erotica, though the milder form
suits her style and prose much better, she feels. Her other
interests include reading about medicine and nutrition.
Readers can send their feedback and get in touch with her
via Twitter @samaradevauthor or email her at
[email protected]

Yes, Mel was desirable. When had she denied it? She wasn’t blind or unconscious. But he wasn’t desirable to her. He wasn’t supposed to be.
‘Wine?’ The smooth suave voice was asking.
She rattled off the name of white wine she usually had at the gallery meets. A little relieved that she wasn’t totally clueless though she’d been out of this game since what felt forever. The waiter nodded and withdrew to get the order, having been told by Mel that the rest would be ordered later.
‘I can’t get over the change in you,’ she blurted out.
‘Why?’ A dark eyebrow rose, his face settling into its usual humorous lines.
‘Clothes make such a difference,’ she murmured, ‘You’re like a perfect stranger I came upon by chance.’ She smiled to lighten the words, but for some reason her pulse was jumpy.
He put his hand across, drawing hers in it. ‘Then why not pretend that’s what’s happening? We’re strangers, meeting for the first time. We’ve just met and –’ He leaned across, holding her gaze, ‘We’re attracted to each other, enough to want to spend some time together.’
Like she had the other day, she felt the spell of his nearness. The dark gaze was so enigmatic yet hypnotizing. She felt the whiff of seductive, expensive cologne, the indefinable warmth and reassurance of him. The male, very male presence that sent certain signals to the feminine instincts arousing this melting response in her. The contact of his hand was forging a bond that was an instigation to get closer…
What was she thinking?
She laughed lightly, trying to escape his inexorable compulsion, the charm she hadn’t expected from someone so earthy.
Or maybe she’d just discovered that earthiness could be sexy?
‘I could never pretend that. I’ve known you for too long.’
‘Have you?’ Still smiling, not at all put out, he settled back, eyes narrowed as he reiterated, ‘Have you?’
‘What a question! Haven’t I?’
But the wine arrived and he was saved from answering.
‘Let’s just say you could find exploration rewarding, if you tried…’
His resonant, cool voice stole across her senses and trapped the breath in her chest. Exploration. Was it physical exploration he meant? She remembered the way he’d leaned into her in her kitchen. A disturbing mental image of that hard chest and silky, hair-covered skin arose that had her control snapping. She couldn’t do this to herself. She couldn’t think of Mel in this context. She was bound to Ian.
Her appetite had nearly deserted her. Not wanting him to guess how his words affected her, she kept up the pretense of looking at the menu, the knot of tension in her lower belly increasing by the minute.
Somehow she chose something, randomly asking for the sea food platter. As the waiter went, she found herself fighting the urge to flee.
‘So what have you decided?’
‘You just gave the order –’
He shook his head, a smile curving his lips and reflected in the glinting mockery of his gaze. ‘About getting to know me better.’ He caught hold of her hand and traced a line on it with the back end of a fork. A light mechanical touch. But the deliberation of the intent made feeling curl into her toes.
‘You know there are ways to know someone. Talk. Touch. Feel. Taste.’ With each verb he demonstrated the action, touching her fingers by entwining hers with his in what seemed an extravagantly intimate gesture. Rubbing his thumb in her palm and up to her sensitive inner wrist till she felt the touch flow with the blood coursing in her veins to her heart. At ‘taste’, he took up her hand and kissed the fingertips, running the tip of his tongue lightly over them till electricity shot through her nerves to her nether zones.
She drew away her hand, feeling burnt by his heated gaze and his errant tongue. Panic swiveled through her. He was going too far, too fast. Yet he hadn’t done anything except the most superficial of caresses. Why did her heart pound with fear? And guilt. And yes, desire.