You are here: Products Dante’s Hope by Jenn Nixon 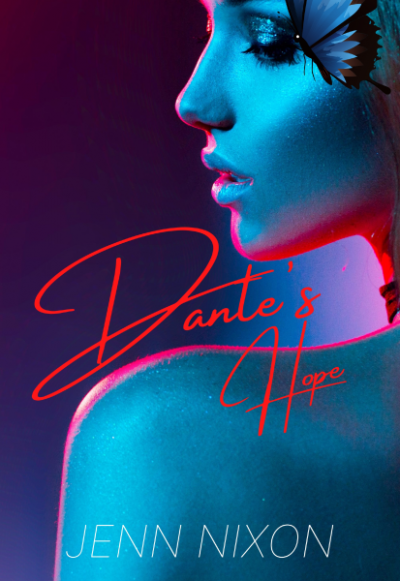 A curse, a vision, and a secret.

With a flimsy piece of evidence and a Psychic vision, “Miss Butterfly”, crashes the Reyes Brother’s charity fundraiser hoping one of them believes in curses. She has a devastating secret and they may be her last chance to get answers.

Fearing the affliction haunting him is tied to the alluring woman roaming through his library, Dante agrees to help her, fighting the powerful attraction building between them.

Together they scour centuries’ worth of myths and legends, determined to find the truth. Neither is prepared when they discover their intense connection may be the key to breaking the curse.

Jenn's love of writing started the year she received her first diary and Nancy Drew novel. Throughout her teenage years, she kept a diary of her personal thoughts and feelings but graduated from Nancy Drew to other mystery suspense novels.

She often adds a thriller and suspense element to anything she writes be it Romance, Science Fiction, or Fantasy. When not writing, she spends her time reading, observing pop culture, playing with her two dogs in her home state of New Jersey.

I've always been fascinated by the Psychic phenomena. I always wondered how people would react knowing they had the ability to sense other people's emotions and thoughts. Dante's story came to me during lockdown, and I was happy to go along for the ride.

Perched on the second story walkway, overlooking the crowd piling into the oversized dining hall, Dante Reyes sighed, unsure how many more of these events his brother would force him to organize and attend before the end of the year. While he enjoyed supporting worthy causes, hopping from country to country for the last eight months was wearing him thin. Grateful to be back in one of their homes for an extended period, he watched the couples of Psychics and nulls filling his home, wondering how many of them were native to London. The city had changed so much in the ten years they’d been gone.

The air sizzled with building energy. Hoping the effervescent and happy vibe bouncing through the room soothed him for a few hours, Dante shut his eyes and breathed in to absorb and charge his body using the energy below.

Drake busted through the double doors behind him, breaking his concentration. “There you are.”

He glanced back and lifted his brow. “Do you mean it, brother?”

“We are not immortal.” He grumbled, turned, and stared at the crowd, ignoring the decorative blue Colombina mask floating next to his face. Drake chuckled and Shifted it closer, honing the skill quicker than he had. Dante swiped the mask from the air and fixed it in place, aware the coloring drew attention to his eyes.

“Your best feature, my man. ‘Cuz your attitude is trash.”

“Forgive me for tiring of meaningless interludes with a string of overzealous participants.”

“Casual. Sex. It’s not that hard to say, and you know that’s not why I do this. Just a perk. Maybe if you didn’t talk like the stuffy old goat that you are people would stop calling you one.” He slapped a hand on Dante’s back.