You are here: Products Dangerous Research Part 1 by Lee Moore 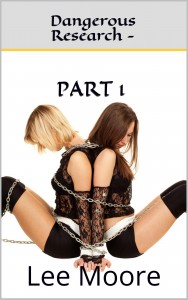 Rachel’s sole occupation and job is as an Indie Erotica writer. She naturally writes what she knows about and when she isn’t 100% for sure about a detail in her storyline, she researches the subject matter thoroughly.

The problems arise when her girlfriend objects to her research methods, and she meets a man who starts to develop an unnatural obsession with her.

My love for writing.