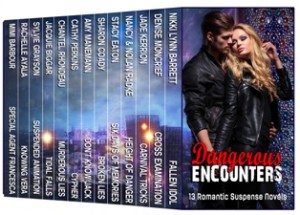 Get your heartbeat racing with 13 romantic-suspense novels from USA Today bestselling and award-winning authors. Nerve-wracking thrills and dangers, heart-melting romance and love–enjoy them all in this outstanding collection of DANGEROUS ENCOUNTERS….

The thirteen authors of Dangerous Encounters are both thrill seekers and romance junkies. We love nothing more than a great mystery with a happily ever after ending. We come from all corners of the United States and all backgrounds of writing. One of our members, Mimi Barbour, just hit the New York Times Bestseller list! We’ve each picked one of our favorite romantic mysteries to include in this set and we are all so pleased with the outcome. Join us for an adventure of danger, mystery, suspense, and ultimate love.

For my personal book in this set, Murderous Lies by Chantel Rhondeau, I was actually inspired by a dream. In my dream, I was my main character, Rose, and the love of my life had just walked through the door. Only problem was, I was afraid of him. In the dream, I didn’t know why this could be the case, but the next day Rose stuck with me and I couldn’t stop thinking about the dream or the ‘why’ of it all. The next day, I started plotting and figuring out why I had been so afraid of the man I was supposed to love.