You are here: Products Dangerous Connections Boxset by Sarah Jordan 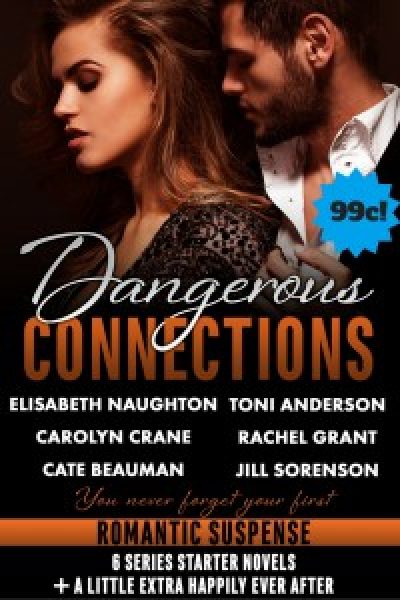 Bonus alert The dangerous connections between each of these series are revealed in never-before-seen bonus HEA chapters at the end of each full-length novel.

To unearth a centuries-old secret, an archaeologist must team up with the rakish thief who’s stolen both an ancient relic and her heart. But they’re not the only ones on the hunt. To beat the other treasure seekers, they’ll have to partner up—because suddenly Lisa and Rafe are in a race just to stay alive.

Angel is an ex-safecracker forced into one last heist. Cole is a badass spy with big plans for his gorgeous thief…he’ll make her pose as his girlfriend to help with a job. But as pretend passions turn real, Cole regrets drawing Angel into his deadly game.

Morgan Taylor’s research team has been brutally murdered and she’s determined to find out why. Not even her father’s hired muscle can get in her way, but bodyguard Hunter Phillips is no pushover. Hunter has met his match in his feisty new client. His reluctant attraction to the green-eyed beauty is the least of his problems when he discovers they’ve crossed paths with a backcountry madman.

FBI Agent Mallory Rooney is hunting the monster who abducted her twin sister and begins to suspect there’s a vigilante operating outside the law. Former CIA assassin Alex Parker works for a clandestine government organization hell-bent on taking out serial killers before they enter the justice system. Alex doesn’t enjoy killing, but he’s good at it. He’s good at dodging the law, too—until a beautiful rookie agent has him wondering what it might be like to get caught.

Accused of stealing artifacts from a shipwreck, underwater archaeologist Erica Kesling is determined to clear her name. An undercover job with the buyer of the missing antiquities puts her close to her goal, until a sexy, charismatic intern with secrets of his own shows up, placing her heart — and life — in jeopardy.

Zookeeper Helena Fjord is passionate about animals. Humans, not so much. Especially not handsome, laidback security officer Josh Garrison, who likes to ruffle her feathers. She steers clear of his silly pranks and sexy smile–until disaster strikes.

If you want to know when Toni’s next book will be out, visit her website (http://www.toniandersonauthor.com) and sign up for her newsletter. If you want to read other fascinating stories about life in a city that, during winter, is sometimes colder than Mars, friend her on Facebook: (https://www.facebook.com/toniannanderson).