You are here: Products Dangerous Ally by Jessica Lauryn 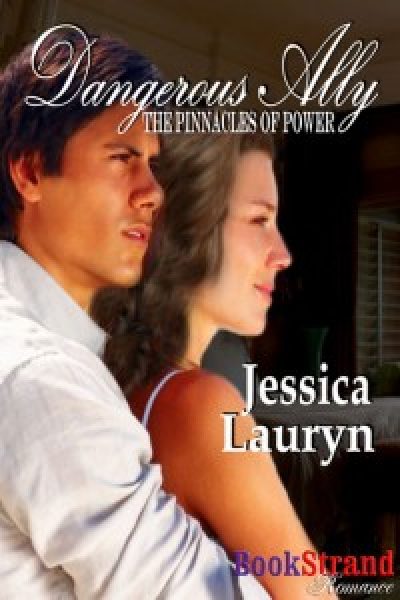 For five lonely years, diamond smuggling kingpin Lucas Ramone has hidden himself from the world. With a father who has baited him all his life, made a game of trying to trip him up at every turn, Lucas will do whatever is necessary to protect what is rightfully his. What he isn’t prepared for is Lilah Benson…

Upon accepting a job in the home of her sister’s maniacal ex-fiancé, reporter Lilah Benson believes she has finally found the perfect way to make her mark on the world. Exposing the criminal endeavors of Lucas Ramone won’t soon be forgotten. But as she comes to know the man who was supposed to be her adversary, Lilah is tempted by a passion far stronger than the desire to see her name in print…

Power and control are tools of survival, critical in a world of thievery and deception. Lilah, an innocent in a land of criminals, may be the one person capable of bringing Lucas to his knees. But Lucas will stop at nothing to keep his empire secure.

He will have it all: His Fortune, His Legacy, and Lilah Benson in his bed…

Feeling the warmth of tears in her eyes, Lilah rose from the table. She never became so emotional over nothing. What in God’s name was wrong with her?
Lucas’s strong hand came against her shoulder. She didn’t pull away. In fact, she had the strangest urge to just lean into him. Like somehow, he would take away all of her doubts.
“Lena’s happy in her life with her children, and with Alec Westwood,” he said. “I’d never begrudge her that. All I ever wanted was her happiness.”
The way he said the words, she almost believed them. He seemed to care, or at least, maybe was trying to be a better person.
“You’re trembling,” he said, reaching in before she could stop him. His finger brushed her quivering lip.
Her instinct was to smack his hand. But the tingling sensation racing from mouth to spine kept her in place. Lucas’s touch was so soft. It made her crazy. She was consumed by the strongest desire for his lips to be where his finger was now.
He took her wine glass and held it out to her. “Here,” he said. “This’ll calm your nerves.”
Senses returning with a bang, Lilah held up two hands in protest. “Are you trying to get me drunk?” she snapped, not entirely sure whether it was him she was angrier at or herself.
“Am I that obvious?” He laughed as if the whole thing was funny, setting the glass back down.
She enjoyed being in the company of a monster—there was nothing lighthearted about it!
“I’m guessing you’ve probably been down this road too many times, hmm?” Lucas replaced his hand on her shoulder.
“What road would that be, exactly?”
His gray eyes looked deeply into hers. “I’m sure I’m not the first man who’s tried to get you into a relaxed state, Lilah.”
“Actually—” She hesitated, not wanting to get so personal yet feeling she could probably tell him anything and he’d somehow understand. “It’s been a long time, longer than you’d imagine. After I finished college, I had every intention of becoming a journalist. Meaning I’d be out most of the time chasing a story despite whatever danger came with it. It’s all I’ve ever wanted, for as long as I can remember.”
He nodded, coming closer. “You must have been very persistent. It takes a good deal of perseverance and sacrifice to become a success at such a young age.”
Lilah sure knew that. While her friends had been enjoying their last semester of college, she’d been frantically gathering writing samples, sending them out to every newspaper who would give her the time of day. But had her father noticed? Even when she became one of the youngest reporters at the New York Times, he’d barely raised a brow.
Deep down, she knew this was why she’d accepted Raphael’s offer, even in spite of the danger that came with it. A story about Raphael Ramone’s family laundry wasn’t going to impress Blake Benson. But exposing Lucas’s diamond smuggling operation would be a print-worthy unearthing that would win her father’s admiration as well as her first Pulitzer.
She lowered her gaze. “I haven’t given up anything so wonderful.”
Lucas lifted her chin. “But if it came to that, do you think you’d be willing to make that sacrifice? Give up something you want—maybe something you want more than anything—to attain some ultimate level of self-victory?”
A chill came over her at his words. Lilah came back a step, unsure of what had just happened but wanting desperately to pretend it hadn’t.
Lucas cleared his throat. “Let’s get some air, shall we?”
Something she needed desperately. She followed him to the balcony, welcoming the cool night breeze as it caressed her hot skin.
“It’s beautiful here,” she said, hoping very much to steer the conversation in a new direction.
“It is.” He nodded and came beside her, bracing the rail with one hand. He slipped an arm around her back.
His body was warm—like a furnace—and he felt strong, as if he spent his days loading lumber instead of dabbling away at a computer.
Lilah shivered, goose bumps forming along her bare arms. It felt so nice being close to Lucas. Too nice. Maybe she’d just stay there with him a few minutes longer. They weren’t exactly hurting anyone by being in each other’s company.
He leaned into her, speaking in a tone she could only describe as husky. “Those men you never met,” he said, “that was their loss.”
She blinked, keeping her eyes on the night sky. “Please. A man’s the last thing I need in my life.”
“Are you sure about that?” Lucas asked, his warm breath coming against her ear. “Or is it possible you’ve been hiding behind your work for so long, you don’t even know how things could be?” His palm brushed her bare shoulder as he turned her to face him. “No one knows what it’s like to be hidden from the world more than I do, Lilah. You can trust me on this. I think we’re more alike than you realize. And it’s possible we’re both missing out on something incredible.”
She didn’t push his hand away as it cupped her cheek. Or his arm as it encompassed her waist. No, she let him do what he wanted. She wanted him to touch her…