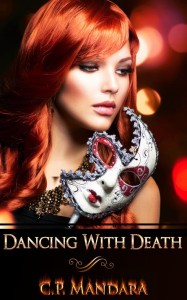 Violetta is an executioner… of vampires. Famed for her fiery beauty and mesmerising personality, she has never failed an assignment.

Monsieur Martinet is no ordinary vampire, though. He is a master at his craft and can control humans with the merest flick of his eyelids. The vampire huntress with the porcelain skin and flaming red hair has killed all of his brethren, without exception. He now seeks the ultimate revenge: her submission in HIS bed.

If he’s allowed to stay alive long enough, that is.

She loves keeping fit and enjoys running, cycling and water sports. Think surfing or sailing. In her spare time she’s usually cuddled up with a good book, exploring the countryside or baking in the kitchen. In fact, she loves her kitchen so much she’s one of few woman who wouldn’t mind being tied to it! Her first and foremost love is writing, however, and more often than not you’ll find her on a laptop spinning tales of romance, erotica or dark, paranormal fantasies.

I love alpha males – and what better alpha male than an unbeatable, unstoppable vampire? But the huntress is no cowering wall flower either – she’s feisty, strong and a little unpredictable – so it’s certainly going to be a match made in hell… for the first two or three books in the series at least!

“Are you ready to die, Monsieur Martinet?” Her voice was clear and deceptively calm, although he wasn’t fooled for a moment.
“What a pleasure it is to meet you at last, Violetta.” He made sure the resonant tones of his voice penetrated her eardrums, and he felt her body clench. It was a beautiful, instinctively sexual response, and she was unprepared for it. The predator inside him preened its feathers. “As ready as I’ll ever be,” he finally replied to her question, nodding his head politely. “Feel free to do your worst, Madame.”
Turning around to feast his hypnotic blue eyes upon her, he widened them to their full potential. These were eyes that could see through a person’s soul in an instant and rifle through suitcases of hidden secrets with casual indiscretion, inhaling them all into his head to be used to his advantage at a later date.
Her eyes widened in fear, as he’d intended them to.
“You have the gift,” she gasped in a tight voice, already backing away from him in panic.
“Ah oui, mon petite,” he said with a menacing drawl. “Did none of the others tell you?” He let himself enjoy the faint tremor that shook her body and rattled her composure. Then, he pushed his will upon her, rooting her legs to the spot as if she had been encased in concrete. Moving slowly towards his now immobile prey, he glared at her with his bright blue irises. “I suspect that’s because you killed them before they had a chance to talk about dear old Daddy.” The look he gave her was faintly mocking.
She narrowed her eyes in response and tried to fight his control. The force of her will struggling to regain the use of her legs was quite impressive but ultimately futile. That didn’t mean that he couldn’t see why most of his coven had fallen under the almost indomitable power that she wielded. This one was strong. He knew her agile body would be lightning fast and that she would know all the tricks of the ‘death’ trade, but it didn’t change anything. The fact remained that she was no match for his particular talents.
“You have killed all of my children, cherie. For that alone you should die. I find these days, though, that death falls short of my expectations in the revenge stakes. It is, in my humble opinion, over far too quickly. So I’ll make you an offer you can’t refuse. Two minutes. You have two minutes in which to kill me in any way that you choose, without interference on my part. If you fail, however, the consequences will be high. I hasten to add that they might even be catastrophic for a woman of your nature, so think long and hard before accepting my challenge.”
He watched her eyes narrow as she waited for his verdict. Her little brain was whirring over countless possibilities of all the cruelties which he might care to inflict upon her and not a one was correct, although some of her ideas certainly had merit. He wasted no time in setting her thoughts straight.
“If you fail, I fancy you’ll be the first of my new breed of children. Depending on how exacting my desire for revenge is, I might even take you for a bride; an eternal one, Violetta.” Her horrified shudder amused him. Delving inside her head once more, letting his talents have free reign, he listened attentively to her thoughts. The first thing he discovered was her terror at having her body overpowered by nothing more than his gaze. She had never witnessed that kind of control before, and her thoughts were already running rampant with the significance of what killing him would mean for mankind. Now that he had demonstrated his skill, he had just painted a great big red cross on his forehead. No matter. Death was the least of his concerns. Her thoughts began taking on a different hue, and this time she wondered how he might use his particular brand of control over her, should she fail. Violetta speculated between whether he would want her as his servant, to fetch and clean for him, or as a blood slave to feed upon, which was the considerably more unpalatable option for her. He resisted the urge to laugh. His designs on her were a little more carnal in nature, although he had no objections to tasting the delightful life-force that flowed through her. He pondered on what the spicy red fluid coursing through her veins would taste like? A Bordeaux? No, that would be a little heavy and old. She was more of a Cotes de Provence rosé, soft, fruity and fresh – with a hint of summer and berries.
Her thoughts, becoming more jumbled and crazy by the second, forced him to pay attention once more. She was on the verge of accepting his challenge, confident she stood a fighting chance at extinguishing his life. Her only concern was the ‘eternal bride’ threat. She did not fear death, surprisingly enough, unlike ninety-nine percent of her fellow mortals. The thought of becoming immortal, however, would shatter her mind to pieces. The eternal damnation, the loss of her soul and becoming the evil she had fought so hard to destroy had her all of a flutter. He heard her deep inhalations of breath as she actively calmed herself down and thought through his proposal logically. In the end, she estimated her chances of success outweighed the risk of her mind’s destruction. Her reasoning was disgustingly noble. She believed that this would be the greatest service to the world her life could offer, and it was her duty to accept. Besides, she figured that he needed her permission in order to change her, and she felt that no amount of persuasion on his part could ever make her agree to such a fate.
If she failed in her task, he would enjoy proving her wrong.