You are here: Products Daisy Chains by Samantha Evergreen 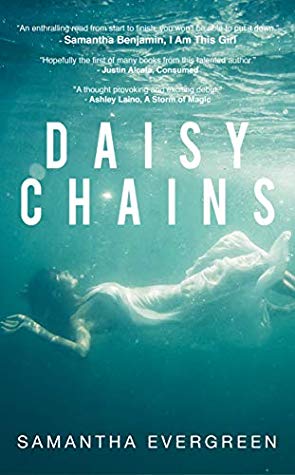 After a wild night of partying on the last day of spring break, three seventeen-year-old friends Rose, Lily, and Violet wake up to find their best friend Daisy Young is missing and in the small town of Watkinsville, Georgia in 1975 that’s not normal.

As the days go by, everyone starts to wonder how the girl who spent her days with her head in the clouds and had no enemies could go missing. Rumors start that she ran away; that’s until Rose, Lily, and Violet find bones in a riverbank.

Watkinsville descends into madness as Chief Thompson and the newly instated 21-year-old Officer Mark Hollow look into what had happened that night. But only more questions arise as men from around town start to confess for no reason, all with the same story. So Rose, Lily, and Violet and Officer Hollow take it upon themselves to find the killer.

But little do they know they’re running against the clock and things may not be quite what they seem.

Hi, I'm Samantha Evergreen, 22. Author of YA novel Dasiy Chains. Currently looking for a literary agent for my second novel. I love talking about writing but don't get me started on what I'm watching because you will never hear the end. I love to cook, read and make music.

No one could tell you why someone would want to hurt a girl like Daisy Young. Everyone would say she was a kind, caring person. Helped Mrs. Johnson carry her groceries home, let the new kid sit with her at lunch.

She got along with everyone at school, the popular girls, the jocks, the nerds, the loners.

No matter who you were you would receive a smile and a kind word from Daisy.

So it was strange that no one could tell you what happened that night if their life depended on it.

But what they didn't know was that some lives did.

“Come on Rose, we don't have all night you know,“ Lily called, sounding bored. Rose rolled her eyes and looked at herself one last time in the mirror, she had curled her brown hair to perfection so that it sat high atop her head, looking just like the models in one of Daisy's magazines. Even her make-up had worked out tonight, her lips a deep red that went with her dark blue eyeshadow.
“Rose, come on, we're going to be late!“
“Lily, chil. Daisy and Violet will wait for us,“ Rose replied, coming out of the bathroom and stepping into her bedroom. Her bare feet warmed by the white shag carpet that Lily still sat on, painting her nails a bright yellow.
Rose wandered over to her closet and looked at the line of dresses. She let out a sigh and picked out a light blue one and slipped it on, the skirt going down to her knees. She stared down at her row of kitten heels and stepped into a black pair before turning around. “Do I look ready?” she asked.
Lily glanced up, her pageboy hairstyle swaying around her head in a blonde halo. “Looks like it to me, thank god,” she said, getting up to grab her backpack. Rose did the same, picking up her bag just in time as they heard her mother's footsteps on the stairs. “Damn,” Rose swore under her breath as her mother opened the door, her lavender perfume filling the room.
“Lily, Rose, there you are. I believe Daisy and Violet are waiting for you outside in that blue thing you call a truck.“
“Thanks, Mrs. Waters,“ Lily said, making a break for the stairs. Rose moved to follow but was stopped by a hand catching her arm. She was spun around so that she faced her mother, her blue eyes looking Rose up and down. “Well, at least you look better than last time,“ her mother said, most likely referring to last month when she’d tried wearing a pair of jeans and a simple top. An outfit her mother had made her throw away afterwards because it wasn't something she’d gotten her.
“Thank you, mother,” Rose said, looking down feeling her cheeks pinken.
“Have some fun tonight Rosalina, but don't drink too much or you’ll get a beer belly,“ her mother said with a smile.
“Yes, mother,“ Rose said making a break for the stairs, not daring to breathe until she was out in the darkening night.
Once outside, Rose stopped and took a deep breath of the night air, looking up to see Daisy already watching her from the front seat, her green eyes and strawberry colored hair were alight with the last bits of sunshine as it blew around her small, pale face.
“There you are! Hurry up and jump in the back, we need to book it to Mark's if we want the good drinks,” Daisy said, a bright smile on her pink lips.
Rose ran over to Violet’s old baby blue truck and hopped into the back along with Lily who was already busy rifling through her bag, most likely looking for her cigarettes. As the engine started up and they pulled away she found what she was searching for and lit one up, the smoke swirling around them as they drove.
“You want one?” Lily said, offering one to Rose.
“You know I can't stand those things,“ Rose replied, wrinkling her nose at the smell, “They’ll end up killing you someday.“
“Oh, please, my mom smoked when she was pregnant with me and I'm fine,“ She breathed out the words with a puff of smoke. “Are you sure about that?” Rose poked at her forehead, “Sometimes I'm not so sure there’s anything up there.”
Lily smacked her hand away with a smile and blew smoke at her. “Gross,” Rose laughed, waving a hand around her face and Lily couldn't keep a little chuckle oh her own from escaping as she put her cigarette out on the bed of the truck.