You are here: Products Daddy Takes Command by Kelly Dawson 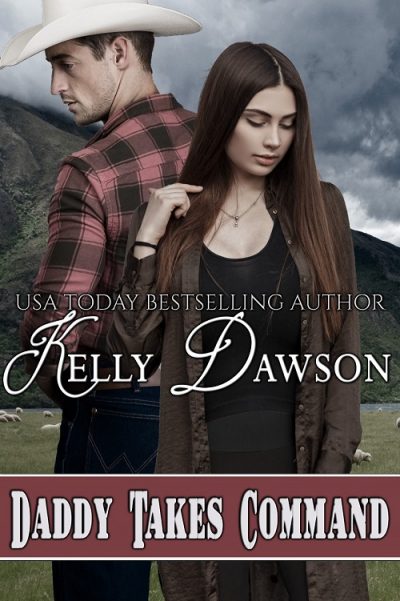 After a serious injury leaves her father incapacitated, Sarah Taylor is faced with a stark choice. To keep the farm that has been in her family for generations, she will have to run it herself. But despite her best efforts, it quickly becomes clear that she is going to need help.

Nick Martin is a champion bull rider, and when he accepts a job managing a farm he is just looking for a paycheck. But then he meets Sarah, and from the moment he sets eyes on her, Nick can tell she is in desperate need of a man who will take her in his arms… and over his knee.

Over the coming weeks, Nick makes it his business to care not only for the farm, but for Sarah as well, and it isn’t long before she is calling him daddy. Though she blushes crimson as her cute little bottom is bared for a spanking, his firm-handed correction arouses her intensely, and when he claims her properly his hard, dominant lovemaking leaves her utterly spent and satisfied.

As Nick and Sarah work to see the farm through the rough winter months, their bond grows stronger each day. But with both of their lives haunted by past tragedies that tore their families apart, can Nick finally find a way to forgive himself and be the daddy his little girl deserves?

Hi! I'm Kelly Dawson, a USA Today Bestselling Author who lives right at the very bottom of the world, in Southland, New Zealand. I share my life with some pretty awesome people – my very own romance novel hero (my husband of 16 years) and my 4 incredible kids.

Cowboys have always been my heroes, horses have been my passion forever, and I'm a proud Kiwi. These three things shine through in my books.

I have Tourette's Syndrome, and so far, I've created two characters who also navigate life with this neurological disorder – Rachel in Rachel's Journey and Bianca in Daddy Takes the Reins (and also appears in the two sequels – Daddies Take Control & Daddy Takes Command).

I've been writing forever. I started writing on any spare scrap of paper I could find, including the back covers of colouring books, school exercise books and the backs of old bills!
My books can be inspired by a tiny little snippet of something – part of a conversation I might have or overhear, a certain smell, the way a person walks…. once my imagination captures something, characters form in my head, a plot works itself out, and the book takes over, stealing away with my sanity!