You are here: Products D-Nine: Protectors of the Crown by Magus Tor 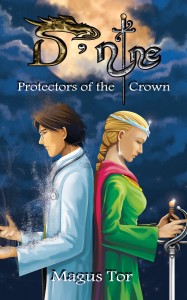 D-Nine: Protectors of the Crown by Magus Tor

In the land of dreams, anything can happen; epic battles, adventure and even humor. In the case of D-Nine a fantasy root is layered inside a unique story arch and concept.

Dr. James has always enjoyed fantasy books because he had been reading them ever since he was a little boy. What he doesn’t know, however, is that he is about to embark on a fantasy quest that he will never forget. James had been suffering from severe migraine attacks, or so he thought. During an episode of syncope, he is brought into the fantasy world of Edonia where he is in unfamiliar territory, in more ways than one. He is in a new land that he has never seen before, in a different time period, he has a different hairstyle and color, and he has an unfamiliar face. As it turns out, he has transformed into a she, an assassin magnet, where he must acquire his skills that he learned in the 21st century to save a land from political scandal and an even bigger conflict in the heart of everyone’s worse imagination. The split between the two worlds is a smooth reboot of old concepts, including the complications of gender identity and responsibilities of the human spirit. Alternating chapters spread a clear view of the situations in both worlds and the conflicts presented. The transition from the real world to Edonia holds the reader’s attention with charismatic dialogue, powerful characters, and cutting edge scenes that spill action and adventure, feeding all styles of hunger in an easily accessible journey that anyone will be able to pick up and enjoy, even those who don’t like fantasy.

Be the first to review “D-Nine: Protectors of the Crown by Magus Tor” Cancel reply