You are here: Products Cursed Wolf by Brogan Thomas 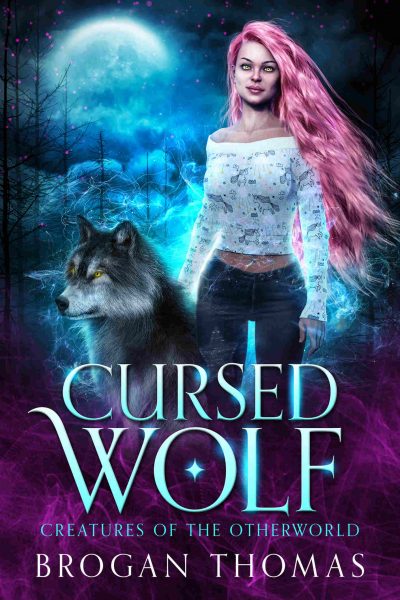 For a shifter…
…being stuck in wolf form is torture.

The moment I shifted; my life changed.

After witnessing a traumatic event at a young age, nine-year-old Forrest shifted into her wolf form – and was unable to shift back. Years later and suffering at the hands of her malicious step-brothers, she stubbornly clings to the hope that she’ll turn back into the girl she once was.

But when her magic returns at the moment she needs it most, Forrest is thrust back into the world of humans. There’s only one problem.
Her pack is out to kill her.

Struggling to learn how to walk and talk again, Forrest finds herself on the run from the cold-blooded shifter council. But hidden deep within her human form lies a secret – a powerful magic that has the potential to set her free.

If only she can stay alive long enough to master it…

If you love high-octane Urban Fantasy with shifters, suspense, and one young woman fighting for her independence amid a dangerous patriarchal world, then you won’t want to miss Cursed Wolf. This thrilling novel strikes the perfect balance between humour, friendship, and slow-burn romance. Grab your FREE copy now!

Brogan lives in Ireland with her husband and their eleven furry children: five furry minions of darkness (aka the cats), four hellhounds (the dogs), and two traditional unicorns (fat, hairy Irish cobs).

In 2019 she decided to embrace her craziness by writing about the imaginary people that live in her head. Her first love is her number-one favourite furry child Bob the cob, then reading. When not reading or writing, she can be found knee-deep in horse poo and fur while blissfully ignoring all adult responsibilities.