You are here: Products Cursed To Love: Doctors in Love Series Book 1 by Noe Segal 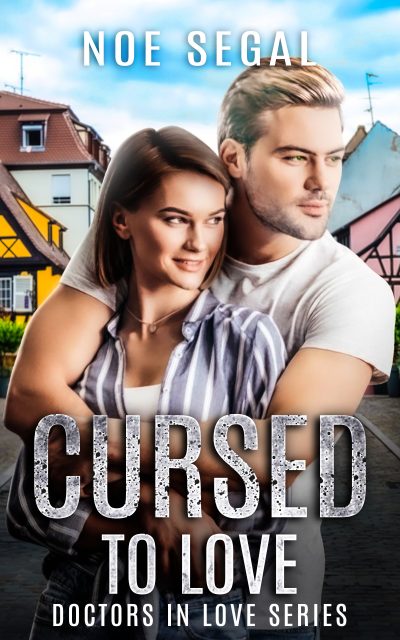 Love has other plans.

Riel is a workaholic and has no time for love. So, of course, he is skeptical when his friend announces that her aunt has cursed all the participants of their doctor-filled group chat to fall in love within 6 months. The last thing the doctor expects is to fall for his feisty, beautiful, and down-on-her-luck tenant, Donna Myers.

Donna has had a few hard knocks throughout her life but is determined to turn her life around. When the sexy doctor offers her help, she cannot help but look twice at the man despite dating a man who promised her marriage.

This story is of an unlikely yet powerful attraction between a man with a need to control the uncontrollable and a woman determined to play it safe. But are the feelings between them truly love or the work of magic?

In his home in Oklahoma, Noe Segal has always had his fill of romance reads. And as a biology major, he has always had an interest in the scientific mysteries and theories of the world. Taking the pen into their own hands, Noe Segal brings new books with heart-throbbing romance or science-fiction for you to enjoy. Enjoy Cursed to Love, the first installment of his Doctors in Love Series.

Cursed To Love is just one out of seven books from my series Doctors in Love. The genre for the series is medical romance, basically contemporary romance revolved around doctors. The entire series is meant to be a collection of easy-to-digest romance stories. There’s no special story behind why I decided to use this type of setting, it just came to mind suddenly how career men and women like doctors may tend to stay uncommitted to romance especially with work constantly on their minds. That thought made me suddenly this, “Oh but, what if there was a prompt for romance?” and from there I built the silly prompt, the characters, and their respective stories.

My aunt cast a love spell on us… Sorry, guys. Expect to fall in love within the next 6 months. *Shrug*

Riel frowned as he read the first text message of the group chat affectionately named Doctors in Arms by the creator of the group and the sender of the message, Journey Fowell. Journey is an exotic, dark-skinned beauty who was a general practicing doctor in New Orleans. She owns her own office and lives with the aunt in question.

She sent the message 6 hours before. After about thirty minutes, the other group chat participants started to respond.

It was a running joke that Journey’s aunt, who they all knew, loved, and affectionately called Auntie Sophie, was a practitioner of magical arts. Her antics had been fun, and it hit home with everyone in the 7-participant group chat. They had all attended the same medical school. Due to the bond they had developed through the 4 years during which they had studied together, Journey had formed this group chat so that they could stay in touch even after they had disbursed themselves to different parts of the United States after that time was over.

Tina Riley, a cosmetic surgeon, and self-proclaimed drama queen was the first to respond. Tell Auntie Sophie to undo that right now. I don’t want to fall in love. Being single is way too much fun to mess it up with icky feelings.

Journey was quick to respond. Don’t you think I tried?!? She put her foot down on this one. No budging this time. Says we work too hard. Wants to see us all happy, married, and with kids before she hits the bucket.

Tina answered with a facepalm emoji. Auntie Sophie’s only 45. Why’s she talking about hitting the bucket like she has one foot in the grave?

Journey: Can anyone really guess at what goes on in that lady’s head? I gave up trying a long time ago.

Tina: This is your fault. If you would just give the lady some babies to dote on, the rest of us wouldn’t get dragged into this.

Lincoln: Aww, man, no! I can’t get married this year. This is finally my time to be a man whore. I agree with Crazy Tina for once. This is your fault, Journey. Fix it! I am not going to be an old man regretting not sowing my wild oats while I could.

Lincoln James was an Obstetrician/Gynecologist (OB/GYN) and had vowed as a New Year’s Resolution to finally shed his shell of shyness and become a ladies man. Riel could imagine the man’s genuine dismay and almost smiled as he shook his head.

Zane: Agreed. This is totally Journey’s fault. I am with Lincoln on this one. My wild oats still need sowing.

The pediatrician’s words caused Tina to send a string of laughing emojis while Lincoln added some agreement.

Nash: Zane, I think you have sown enough wild oats. Your face is right there in the dictionary next to the definition of man whore. But seriously, Journey, WTH??? Give the lady some nieces and nephews already so she can get off our cases. I don’t have time for a wife and kids.

Nash was assigned to the Emergency Room like Riley. Instead of being situated in Miami like Riley was, he worked in New York City.

Journey: Why are you guys picking on me? I am as much a victim here as anyone else!

She punctuated her words with crying and eye-rolling emojis.

The chat continued with more jokes and complaints.

Riel heard his name being called over the intercom and knew that his break was over. Being assigned to the ER, Riel was used to the fast pace and high-stress levels, but this was ridiculous. Normally, he thrived under pressure, but he was feeling off today. It was a bother that he could not identify the cause. He was in the middle of his third straight shift because the hospital was short-staffed. He had only come into the locker room to have a bite of his favorite candy. He was stressed, and so his sweet tooth was acting up. The ER was littered with more people than usual today. He was only still running because of the coffee machine in the common area the hospital staff shared.

He glanced at the messages one last time as he put the remainder of the candy bar back into his backpack. The only person whose input was missing was Danrick, but that was not unusual. The man had decided to drop off the grid for a few weeks. He did so every year. Even though they had all been friends for more than 8 years, the man was still mysterious and brooding.

Riel’s name was called again, and his fingers flew across the screen of the smartphone.

It’s a good thing that I don’t believe in that mess, or I would be worried, he typed and hit send.

Since the last message was sent more than 2 hours ago, he did not expect a response. So, he was surprised when the phone vibrated in his hand. He raised an eyebrow when he read the last message.

Journey: Auntie Sophie says you are up first… Love’s going to get you, Mr. I-am-never-falling-in-love.

He felt an odd pang in his chest but dismissed it as he sent a digital eye roll at this friend before dashing out of the room a few seconds later.