You are here: Products Cursed Hearts (A Crossroads Novel) by Rebecca Light and Samuel Lowell 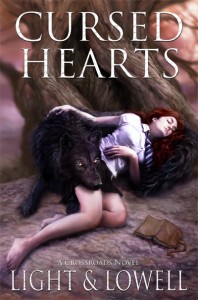 Cursed Hearts, A Crossroads Novel – the first book in what will no doubt prove to be an epic series. It’s a witty, supernatural page-turner that will keep you guessing. And the read is much like walking down a deserted street on a dark, misty morning – spine-chillingly beautiful.

…Rarely when we’re down does the world offer us a hand up instead of a sharp kick to the ribs. But when Rome Navarro, a penniless kid with home issues, receives a scholarship to a prestigious school in his hometown, life is starting to look suspiciously hopeful. Little does he know, Vardel Academy houses an old, deeply guarded secret, and Redwood Bay is harboring mysteries of its own that are just as unsettling. Things become stranger still when he learns of a curse that his family is supposedly plagued by. A curse that involves the shy redhead he has his sights set on. Throw in a guy with an unhealthy fascination for him, and a love rival with cruel intentions, and you’re left with a recipe for both a devilish good time, and inevitably, disaster.

Cursed Hearts is the perfect mix of romance and mystery, and the coming of age story you’ve all been waiting for. It’s a gritty, heartfelt tale with eerie undertones that will leave you breathless. In a world where magic lurks around every corner, the most magical thing may be the characters themselves. Venture into one of the greatest fantasy stories ever told, and come out the other side, forever changed.