You are here: Products Cursed Ever After by A.C. James 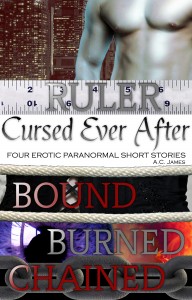 Cursed Ever After by A.C. James

Arie is having a bad night but what else is new? When vampires deal with demons nothing less can be expected. He heads to the Hellfire Club to report back to his sexy boss, Tessa Green, anticipating that she’ll be less than satisfied with the details of his night. Instead he finds a hot new hire waiting in her office. Alone in the office, she offers him an intriguing opportunity to improvise.

Luna is always tied up in difficult situations. Obsessed with someone she can never have. From the moment Luna first met Victoria, she knew she was different—hot, dangerous, and unlike anyone she’s ever known. Luna can’t stop thinking about her. Can’t stop fantasizing about her. Can’t stop craving the one thing she knows she can never have. The one she wants—the vampire she wants abstains from blood and sex.

To distract her from her obsession, Luna begs Tessa to find an appropriate diversion. Bound and gagged in her dungeon at the Hellfire Club (HFC), Luna gets an unexpected visit from a sibling that leaves her feeling conflicted and heartbroken. Arie steps in when Luna is vulnerable. Is there more to this hot alpha vamp than his hard-ass facade?

Victoria has a sordid past and this macabre tale is woven with lies, blood, betrayal, and vengeance. In the far north of France in the 1700s she took care of a young girl and her ailing mother. She never planned on falling for Henri in the process—except she fell in love with the wrong man. She fell in love with a monster. Sometimes evil hits too close to home. And when you trust the wrong person you might just get burned.

Eternal Ever After Preface

The book is a series of short stories about the character of an upcoming series Eternal Ever After.

The room pitched in darkness with only the dim glow from the candelabra that cast shadows over the bed. I could see my reflection in the oval mirror inlayed in the center of the steel headboard with its bendy black rungs. And I could feel the rope brush against my skin as I squirmed in the binds that Tessa had created—my body lay twisted and contorted. I could almost fall asleep like this; my long silver hair pulled tight, my mouth gagged, because I’d been bound like this in Tessa Green’s dungeon on the third floor of the Hellfire Club many times before.

Be the first to review “Cursed Ever After by A.C. James” Cancel reply