You are here: Products Crossing the Mirage – Passing through Youth by BS Murthy 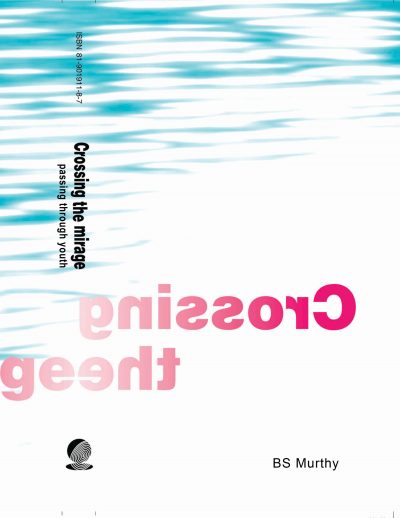 Crossing the Mirage – Passing through Youth by BS Murthy

If passing through youth was like crossing the mirage of life for Chandra and Nithya, it proved to be chasing the mirage of love for Sathya and Prema though for plain Vasavi, Chandra’s pitiable sibling, it was the end of the road.
As life brings Chandra, who suffers from an inferiority complex for his perceived ugliness, and Nithya, who was bogged down being jilted by Vasu, together, they script their fate of fulfillment.
And as poetic justice would have it, Sathya, who caused Prema’s heart burn, himself was led down the garden path by Kala, doing a Sathya on Sathya.
Just not that, life has in store just deserts for Vasu owing to Nithya’s retribution as he tries to stalk her. Besides, after many a fictional twist and turn, the way the story ends, challenges the perception that fact is stranger than fiction.

Born 27 Aug 1948 and schooled in letter writing, I’m the author of Benign Flame: Saga of Love, Jewel-less Crown:: Saga of Life, Crossing the Mirage: Passing through youth (plot and character driven novels all), Glaring Shadow: A stream of consciousness novel, Prey on the Prowl: A Crime Novel and Onto the Stage: 'Slighted Souls' and other stage and radio plays besides Stories Varied – A Book of short Stories. All these were borne out of my conviction that for fiction to impact readers, it should be the soulful rendering of characters rooted in their native soil but not the hotchpotch of local and foreign caricatures sketched on a hybrid canvas. : http://www.gutenberg.us/authors/bsmurthy

My non-fiction works are Puppets of Faith: Theory of communal strife, Bhagvad-Gita: Treatise of Self-help (sans 110 interpolations in verses with contemporary idiom) and Sundara Kãnda: Hanuman’s Odyssey, also in verse. My audio rendition of my Bhagvad–Gita can be heard on YouTube – https://www.youtube.com/watch?v=6vFU3-LD4iM

Besides articles on general management (The Hindu), materials management (Purchase) general insurance (The Insurance Times) and literary/social subjects (Triveni,) I had contributed ‘Addendum to Evolution: Origins of the World by Eastern Speculative Philosophy’ to The Examined Life On-Line Philosophy Journal, Vol. 05 Issue 18, Summer 2004.

Having taken to reading classics, on my uncle’s advice, in my adolescent years, I continued savoring the works of Tolstoy, Dostoevsky, Gogol, Turgenev, Zola, Flaubert etc. (Proust and Musil came much later), without being polluted by accompanying daydreams of emulating those great masters, whom I came to deify in thrall.
When I was forty-four, I set on my maiden novel, Benign Flame: Saga of Love, so to say, without any apparent provocation or inherent ambition, probably through divine diktat for by then life had prepared me to venture into the fictional arena to enrich the same. It's as if I was led there by my 'writing hand’ through the letters it penned for me in my youth and the articles it let me shape as an observant adult.
It's the creative energy, which ‘Benign Flame’ unleashed that propelled me into 'Crossing the Mirage' besides sustaining to enable me to offer eight more works to the literary deity.