You are here: Products Crossing the Line by Samantha Long 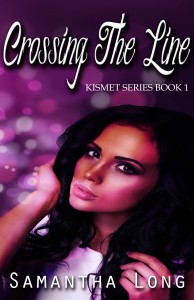 Crossing the Line by Samantha Long

Victoria doesn’t have time for love after a bitter divorce. She’s too busy. Her twin daughters are approaching puberty and her interior design business is expanding. So when Nick enters her life, she has to remember why she’s too busy for a little lust. Which is difficult considering he’s the contractor hired to redo her office. Besides, his tattoos and MMA past make him a poor candidate for a woman who’s trying to level out her life.

A multitasking mom of four from Alabama, Samantha Long has been writing since the first grade. Samantha’s first story consisted of a one-paged fantasy biopic entitled, “If I Was An Indian”. Samantha’s racy writing tastes were evident at a young age, with the plot consisting of a warrior husband, elite living quarters, and an affair with the Chief. When she’s not writing, doing laundry, or changing diapers, you can find Samantha in front of her DVR catching up on episodes of Supernatural and Castle or enjoying sweet tea with a movie or good book. Samantha’s writings are inspired by the works of Nora Roberts, Lauren Kate, Kresley Cole, and Gena Showalter, to name a few.