You are here: Products Cowboy’s Pride by Morgan Blaze 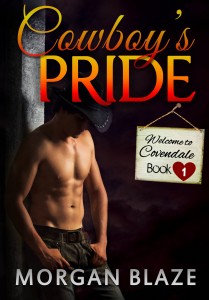 For six years, Sydney Davis has completely avoided the man who broke her heart. Now she needs a favor, and ranch owner Cam Thatcher is the only one who can do it. She thought she was over him — but when she sees him again after all this time, her powerful attraction returns stronger than ever.

Cam wants nothing to do with the woman he used to love — especially when he finds out she’s marrying the man who’s trying to destroy him and take his ranch. But he soon realizes his feelings aren’t as buried as he thought. When he learns Sydney doesn’t know about her fiancé’s dark side, he races to stop her from making the biggest mistake of her life…and his.

WARNING: This is a steamy contemporary romance. If you’re not into sexy times, you may want to give it a pass. **All books in the Welcome to Covendale series can be read as standalones!**

Look for new releases from Morgan Blaze every month — visit www.morganblaze.com to sign up for the newsletter and get notified when new books are released.