You are here: Products Cowboy Time by Melissa Keir 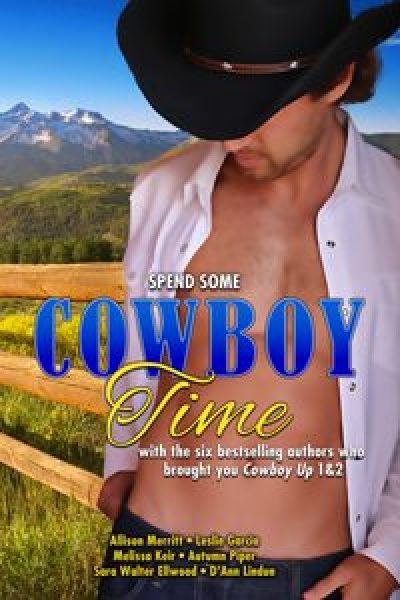 Spend some Cowboy Time with the bestselling authors who brought you Cowboy Up 1 and 2.

Happily Ever After, Cowboy by Allison Merritt

A Pigskin Cowboy by Melissa Keir

Melissa doesn’t believe in down time. She’s always keeping busy. Melissa is a wife and mother, an elementary school teacher, a book reviewer, owner of a publishing company as well as an author. Her home blends two families and is a lot like the Brady Bunch, without Alice- a large grocery bill, tons of dirty dishes and a mound of laundry. She loves to write stories that feature happy endings and is often seen plotting her next story.

With so many families affected by death and still being young, can they go on? How do they find life and love again?

He turned away from the coffee pot where he’d been filling her thermos. “Yep.”
“Another day, another dollar.” She opened the door and stepped outside. Still dark. The sun wouldn’t be up for another half hour or so and a few stars still littered the morning sky. As she followed the meandering path from the house to the barn some of her lilacs had begun to bloom and their sweet scent filled her senses. In spite of not being a morning person, Lily loved the feeling of being the only one up in the early hours.
Except she wasn’t alone.
Will was with her.
The thought staggered her a little and she stumbled. Before she even had time to react, Will’s arms circled her waist. He pulled her so close her body pressed against the hard length of his. “You okay?”
“Fine.” Did she sound as breathy as a teenage girl? He didn’t immediately release her, not until she wiggled to be free.
“Be careful.”
“I will.” She stepped away from him on legs more shaky than before.
Lily’s mind churned as she led the way to the barn. She hadn’t dated since Jeff’s death and had had no desire to do so. Being a widow, keeping her husband’s memory alive, was all she needed. Now, she wondered if being alone for the next thirty or forty years would be okay as she’d previously imagined.