You are here: Products Cowboy Sanctuary by Michelle Hughes 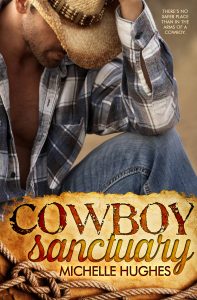 Raised as an Air Force brat, she traveled the world. Her love of writing comes from teaching her grandmother to read since she worked on a cotton farm in Alabama, and wasn’t allowed a full education. Michelle was also a country singer/songwriter who appeared on the Midnight Jamboree in Nashville and toured for twelve years with a satellite talent showcase.

I was in the mood for a sexy cowboy so I decided to write about one. This is the first contemporary western romance I’ve written. Most of my work is New Adult, or erotica.