You are here: Products Covenant Breakers by Lynn Landes 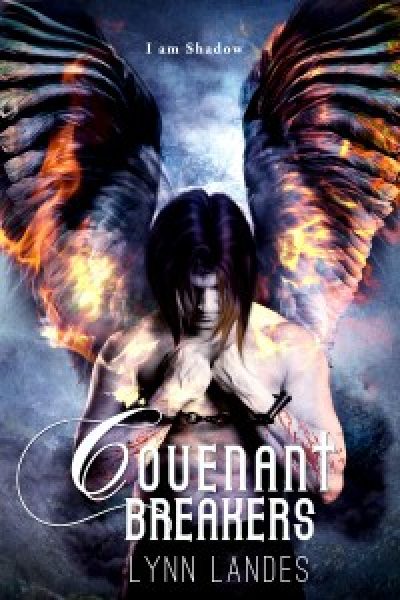 Elina is a human caught in the middle of a war between the Shadow and the Light. One side seeks to destroy her and the other longs to posses her. She struggles against her feelings for the Guardian Angel Malach, but the Covenant must not be broken. Is she strong enough to fight both Heaven and her desire?

“The Heavens are corrupted, the Covenant is broken! Angels are falling, and I am close!” he whispers from his knees. Brother against brother, immortal beings bent on two different paths. One Shadow and one Light, Malach fights to protect Elina and keep his covenant to his maker.

Ancient and immortal, imprisoned by his Father, the demon Raphaim despises humanity for its weaknesses. Fleeing from centuries of imprisonment, he will seek revenge against those who betrayed him. Nothing will stop him, not even the woman who taught him compassion, opened his heart, and cared for him in Hell.

The Fallen Archangels captured Varena as a child, now a beautiful young woman she has lived centuries without love. Her only companionship the crazed demon, Raphaim. Abused and mistreated she sustains her sanity by holding onto her faith. Will he break the covenant and free her or break her heart?

Lynn Landes is the author and independent publisher of The Covenant Series. Her stories span the spectrum of Romantic Fiction from paranormal, romantic suspense to Christian fantasy. If you like fantasy, temptation, and adventure be sure to check Lynn’s blog at www.followlynnsthread.wordpress.com for upcoming titles.

My love of fantasy books and Angels.

Elina watches from her shadow form, quietly tracking the demons here. They are stalking Elsbeth and she needs to know how they found her. With every step Elsbeth takes, the demons follow. One by one, they are drawn to her, attracted by the gold light that surrounds her soul. Unlike most, Elsbeth’s gold light is flashing. They make no move to take her this time, just follow as though being pulled along behind her. Elina watches Fascinated as smaller demons begin to follow.
Two men approach Elsbeth, sensing her danger. Their auras surround her protecting and shielding her. The protection of his shield blocks out Elsbeth’s light and one by one, the demons fade back to shadow. Surprised when Elsbeth falls, she follows close behind as they head to the medical tent. Elina stays back against the wall. Waiting to see who else is being tracked by the demons. She watches closely as they arrive. They are all clear. Time to get some answers Elina decides.
Fading back, she sends a pulse of energy hoping to attract a few demons to her. Cautiously she moves to the alley behind one of the buildings and waits. When the first demon appears, she smiles in the dark. Fading into the wall, she waits, sending another small pulse behind it. It turns slowly looking for the source, just as another shadow bigger than the first enters the alley. Slipping higher up the wall towards the roof, she sends a pulse of energy where she once stood. She watches as the smaller demon lunges toward the wall looking for the cause, while the larger demon lifts its head and pierces Elina with its red stare. He leaps, hissing at her, only to find to his surprise that she has vanished.
Coming up straight behind the smaller demon, Elina uses as little energy as possible and whispers in his ear, “Be gone, skia.” Watching it explode to mist, Elina turns facing the larger demon. With a screech, he dives at her, only to scream in horror when her sword pins him to the alley wall. “This is my skia sword. That’s shadow in Latin, demon. I can make this quick or painful, you decide,” she says giving the sword a twist.
With a roar of rage he tries to pull free, but is unable to move. A slow burn begins and his shapeless face looks at her. The black blade begins to glow red. “He is hungry for your soul, demon. Let’s not make him wait. Why were you following the girl? What drew you to her?” she demands.
His face shifts suddenly into focus. He is unable to hold the shadow form any longer. This demon is in multiple stages of rot. His face is half covered in stretched and graying skin. Half his nasal cartilage shows through, along with the bones in his neck, and jaw. His decaying flesh dangles loosely. Delighted at the disgust he sees in her face, he snarls, “She bares the mark.”
Displaying a black, jagged edged dagger similar to the sword, she aims for his only eye. Cocking her head, she shoves the black edge through his eye socket and pins his skull to the wall. His scream echoes through the alley and Elina feels the vibrations. More demons are coming.
“What mark, demon?” she questions.
Desperately he swipes at her with his free arms trying to grab her, “They are coming for you. I don’t have to tell you anything!”
“Oh, but you will tell me, demon.” Elina backs up and reaches for her power; creating a web similar to the web of a spider. She covers him completely, sealing him against the brick wall. Fading to shadow, she smiles leaning on the wall next to him. “This web is special, it hides you from detection. They won’t hear you, see you or smell you. I can wait.”
The demon stuck to the alley wall begins to spasm, in a weak attempt to break his arms and legs free. Going completely still, he feels his brothers near. He screams, rages, wails, and blusters to no avail. “What are you?” he whispers as the shadow demons creep by.
“I am the Keeper, demon,” she whispers into the cavity where his ear used to be.
In a panic, he tells her, “She is marked by a son of the One! Free me now, I have told you everything I know!” he says struggling to get free.
“How do we free her?” Elina asks, stepping from the shadow, cutting the web free, but leaving him pinned to the wall with her sword.
Sensing his freedom, he tells her “Only the one who marked her can remove it, or a Son of the Light.”
“Thank you,” she says. Elina starts to walk away, thinking about how she will help free Elsbeth. “Wait, Keeper, free me!” he roars.
“Oh right,” she says, and showers him in light. Glistening in the golden light, he begins to scream as it soaks in. Suddenly his screams turn garbled and he begins to melt like dripping wax. Elina watches as the muddy shadow swirls amongst the liquid light on the alley floor, then she pulls her skia free and walks away.