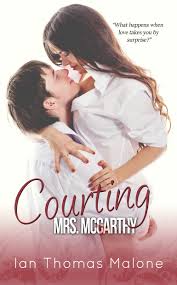 Nathan is terrible at relationships…

Just ask his absent father, his controlling aunt and uncle…or his ex-girlfriend, Sarah. All he wants is to spend the summer before his senior year relaxing in the sun without any conflict or drama. But when he lays eyes on the beautiful, married mother of three at the opening of a yacht club, all bets are off.

Jacqueline McCarthy’s life is nothing but a façade…

Her husband is a disgraced former athlete who prefers to have his ego stroked by other women. Jackie fills her empty days with yacht club events with other bored, wealthy housewives she can’t stand, and she’d give anything to truly connect with someone.

When she meets Nathan and asks him to watch her children, she is captivated by the handsome, charismatic young man with a swimmer’s body.

Jacqueline’s attraction to Nathan doesn’t go unnoticed and one particular vindictive gossip is determined to expose what she considers an unsavory secret.

Her campaign of rumors and innuendo—and eventually physical evidence—draws the attention of friends and strangers alike, and threatens to bring their world crashing down.

However, sometimes those who are quickest to judge

are the last ones who should be throwing stones…

Ian believes firmly that “there’s more to life than books you know, but not much more,” a quote from his hero Morrissey. When he’s not reading, writing, or teaching yoga, he can probably be found in a pool playing water polo. He aspires to move to the Hundred Acre Wood someday, though he hopes it has wi-fi by then.

I wanted to approach a topic that many consider taboo in an unusually quirky fashion.

Nathan knew what normally came next even though there were no standards for the path he was on. He wondered how affairs usually started without judging the fact that he fully accepted that what he was doing was a violation of one of the Ten Commandments. All the thoughts he’d experienced about morality faded from his brain. This was what he wanted, and he could gather beyond a reasonable doubt that it was what Jackie wanted too.
That didn’t stop him from opening his mouth.
“Jackie,” he started to say. She turned around so they were facing each other.
“Shh,” she said, putting her finger to his mouth. “You’ll spoil the moment.”
They kissed. Time, ideas of whether this was right or wrong, and all the other voices in his head stopped. Nathan’s brain switched over to autopilot and knew when the moment was right to end their first kiss. He adhered to her command to keep quiet and stared deep into her eyes. Two weeks ago, Jackie McCarthy was just a name to him, one he wouldn’t have given a second thought about. Now she mattered. Now she was the object of his youthful desire. What he was to her didn’t matter tonight.
She broke the silence. “You do have a bedroom here, right?”
Nathan nodded, and she got off the couch with his hand in her palm.
“Show me the way,” she whispered.