You are here: Products Courtesan of the Dragons: A Dragon Shifter Romance by Tessa Thorn 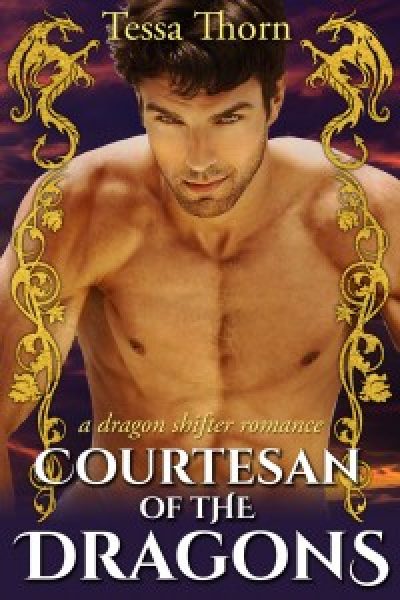 Courtesan of the Dragons: A Dragon Shifter Romance by Tessa Thorn

Young courtesan Serena is a new member of the famed and envied Guild. Trained in the carnal arts, the courtesans pledge their lives to serve the elite Dragon Knights, enjoying forbidden pleasures, opulent luxuries, and handsome men galore. The only catch is that they must forgo the path of marriage and motherhood.

Unfortunately, the enigmatic Council bans courtesans and Knights from pursuing romantic relationships. As Serena and Spar pass the point of no return, they uncover secrets that threaten to disrupt their world…

When she isn’t working on her next book, she enjoys hand embroidery, snuggling with her cockatiel, and listening to music of all genres.

The Knights were all so beautiful, with their broad chests and sharp jaws, that I would have been pleased to pair up with any of them. Before I could even make a move, one of them strode up to me. I had been chosen.
“I’m Spar,” he said, his voice low and rough, a smirk coloring his expression. As I took in his appearance, scruffy black hair and golden-green eyes and all, I realized that he was familiar. Had I seen him around before, walking through the grounds of the Guild? I was startled when I remembered that he was actually the Knight I had seen after my initiation ceremony, on my first night here. He was the one who had made that lewd comment. I couldn’t remember what it was, but I remembered how it had made me feel.
Of course, only someone dripping arrogance like him could have made a comment like that. It had to be him. Those golden eyes were unmistakable, and now that I was aware, I saw that he was looking at me like he could see under my clothes. It was just my luck to be paired with someone as lascivious as he, though with his looks, I found that my body wasn’t complaining.
I tried my best to match his confidence. “I’m Serena,” I said, standing up straight and puffing my chest out. His eyes fell down to my breasts and I shivered. He was looking at me ravenously, as if I was a deer that had offered itself for his consumption, and he couldn’t wait to take me back and devour me. The thought was simultaneously thrilling but frightening. But more than anything, it was arousing.
We had gone without orgasms for a week or so, and I could feel my body responding to his attention. My core was already dripping wet and my skin sensitive; the fabric of my dress rubbing against it was almost too much sensation. I was focused entirely on his eyes, trying to summon all my bravery to show that I wasn’t scared.
And I wasn’t. The Knights were men, after all, and goodness knows I had had to deal with male attention ever since I grew curves. But I was still new to experimenting sexually with them, and knowing that I was going to be doing it with the one right in front of me was unnerving. Not only because he was a Knight—and he could turn into a dragon—but also because I simply didn’t know him.
“Now, the Knights have been briefed already, as I said, so get going, everyone. I expect you back here at a quarter until the hour,” said Arianne.
“Are you ready?” asked Spar. A grin played about his lips, as if he was anticipating what he was going to do to me.
“Of course,” I said, hiding my nerves with a sly smile. We were going to go to my room and he wasn’t going to hurt me, after all… But it was going to be the first time I would be alone in my room with a man.

Be the first to review “Courtesan of the Dragons: A Dragon Shifter Romance by Tessa Thorn” Cancel reply