You are here: Products Corrupted Hearts by J.E. & M. Keep 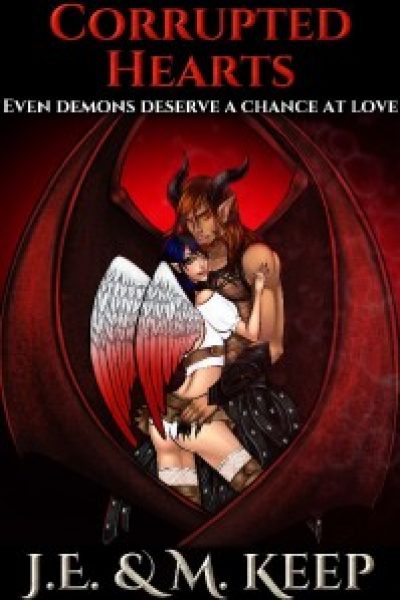 After all, even demons deserve a chance at love.

With her angelic wings and his demonic horns they were never meant to come together. But his red eyes trap her and her seductive wings lure him. Their hot demon blood clashes. What starts as one night of carnal pleasure turns into an adventure of epic portions.

Shades of Dungeons and Dragons twisted in wicked ways

Within days of meeting Lilah and Glaurakos fall across the path of an evil sorceress who traps them in a strange and dangerous “other world” The threats in the new world are perilous, yet their lust for each other is far more frightening. Will their bond be strong enough to make it out alive?

Against all odds of the damned, can love grow between two half demons?

This fantasy novel is a twisted romance at its core inspired by Dungeons and Dragons/Forgotten Realms, by best selling Paranormal Romance authors J.E. & M. Keep.

Joshua and Michelle have been writing fantasy erotica for over 10 years from their home in St. John’s, Newfoundland Canada. They are the owners of Darknest Fantasy Erotica, a forum dedicated to adult fantasy and video games.

Be the first to review “Corrupted Hearts by J.E. & M. Keep” Cancel reply