You are here: Products Coquina Hard by Lorain O’Neil 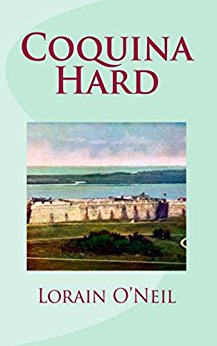 We were all taught that thirteen colonies united against the British in the American Revolution—nothing is ever mentioned of the fourteenth colony, the one that went loyalist, fought against the Revolution, and paid a devastating price: Florida.

Coquina Hard opens amidst the true story of the British military crushing the rebellion of thousands of Catholics who’d been tricked into slavery by a British aristocrat, Dr. Turnbull, sailed to Florida, and forced to build a town (New Smyrna, which exists to this day).

One of those enslaved is orphan Toria Brighton who escapes and falls in love with a handsome Georgia patriot who gives her the chance of returning home. Instead, Toria chooses to return to New Smyrna to lead survivors to freedom in St. Augustine (the daring escape is true and well documented historically) while the American Revolution explodes around her.