You are here: Products Conflict of Interest by Katie Bachand 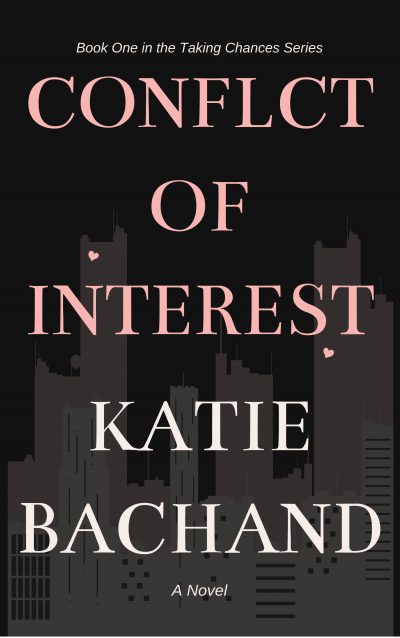 Conflict of Interest by Katie Bachand

Luke Wallace has a knack for planning and strategy. It’s why his father, owner of the Wallace Corporation, has allowed him to come work for the family business. Their reputation of acquiring smaller, very successful businesses precedes them, and now they’ve set their sights on the number one accounting firm that serves small to medium-sized clients, Thomas and Jane LLC.

This time around, Luke has a plan to move in a slightly different direction, but it’s going to take time before he can convince his dad it’s the right move for Wallace Corp. The plan includes meeting the interim CEO and President of Thomas and Jane, Grace Thomas.

As far as plans go, it seems as good as any. So, with the help of his buddy, Travis Mavens, everything is set in motion. As he’s always done, Luke leaves a little room for the unexpected, but when he’s finally ready to execute a little fate steps in.

On a beautiful Fall night, Luke finds himself colliding with Grace outside of a pretty little brownstone in downtown Minneapolis, and the unexpected happens – he falls head over heels in love.

Grace Thomas has been through a lot over the past year. With her father passing away and leaving the family business for her to run, it’s consuming her life. Now, hearing rumors that the Wallace Corporation is looking to take over her prized possession, she prepares to fight. But what she doesn’t prepare for is Luke Wallace

Grace, the level-headed businesswoman, finds herself quickly navigating the early stages of love. In doing so, she turns to her friends Aimeé, Casey, and Rachel for advice. It seems she, and they, feel Luke is perfect for her. But, there’s one thing her handsome new lover isn’t telling her.

When Grace finds out who Luke really is, will the love they found be enough to save them?

The stakes are high in this smart, passionate romance. Conflict of Interest will leave you laughing, crying, and finding a special place in your heart for these friendships, families, and the intimate feeling of love between them all.

Katie was born in suburban Minnesota, just outside of Minneapolis. Growing up was a whirlwind of sporting events and family gatherings. Katie tried her hand at writing early on. She created children’s books with friends about beautiful horses and troublesome monkeys – some of which were eerily similar to Curious George (you can decide where the inspiration came from). She also took a stab at poetry that went on to be published in fifth grade. During this early childhood her writing stood second place to two things: basketball and her reading habit. Katie stands at five feet-four inches on a good day. Needless to say she’d need something else to sustain a decent lifestyle. So she accepted her first true loves – The Boxcar Children and Nancy Drew. She experienced early the consequences of staying up too late to finish a good book. After three decades, she has yet to learn her lesson.

Today, Katie lives in Minneapolis, Minnesota. She shares a loving home with her husband, son, and golden retriever (all of them extremely handsome). With her personal life on track, Katie decided to ruffle some feathers professionally.

After starting her career with high hopes of becoming the next great marketing executive, Katie took a slight detour to dabble in IT. Not all of her decisions have been good ones, but alas, she makes it work.

All-the-while, Katie has maintained an insatiable reading habit. This habit is what lead her to try her hand at writing once again. One day, while walking through her local book store, she realized she’d read all of the books of interest to her. Debbie, Nora, Claire – she’d read them all. She even sped through Patterson and Sanford’s crime and thriller series’. Faced with a decision; she could either buy the latest presidential biography (insert depressing emoji here) or she could pick up that bright, obnoxious yellow, Writing Romance for Dummy’s book (yes, you read that right). She made her choice and to this day doesn’t remember the President that adorned that big auto-biographical book.

Katie maintained her career in IT until the pre-release of her new romance novel Conflict of Interest, book one of a four-part series about four girlfriends who find unwanted, unexpected, and unlikely love.

Katie is a hopeless romantic and romance author at heart. Her romance varies from light and sweet to edgy and sexy. She believes every book that has even a hint of romance is better for it. Though skeptical, she accepts romance might not be the genre for everybody. But she is adamant there is a book out there for everyone. She believes at least once in their lives people should get lost in another world. They should meet characters they love, hate, romanticize, and befriend. She thinks with every book that closes there’s a little bit of sadness in leaving it behind, but she hopes it’s not long before a new one opens.

When she isn’t writing romance, Katie is spending time with her family, in the kitchen or garden, or nose-deep in a good book. Want more? Head over to Katie’s blog to read the ins-and-outs of her life, the ongoing short story series Happy Hour, and to her social media pages to catch her latest updates!

I wanted a classy, modern and sophiticated female character to take the lead. She, and her friends, are powerful and distinct, but all have one thing in common – their love and support for each other. It was only natural that these women would need handsome and charasmatic men as their love interests.
I think this book shows you can be successful and not stray from yourself and what you've worked for to fall in love – but also – that it's okay to give a little for love as well. And sometimes, that's how the best of love begins.