You are here: Products Come Find Me by Travis Neighbor Ward 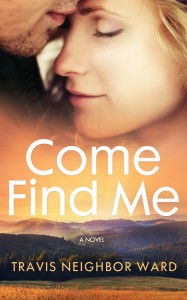 In the tradition of the greatest love stories of our time, COME FIND ME tells a poignant tale of how true love can survive time and war, and push people to confront unthinkable choices.

At twenty-six Jessica Wilson believes her future is laid out. Her father and brother-in-law both died in war, and now she’s helping to care for her mother and her sister’s children. She’s also managing a wildlife rescue center in the Georgia mountains, where she met her wealthy Canadian fiancé, Blake McCormack, a rancher. Everything seems perfect. So why is it that she breaks into a sweat whenever she pictures Blake announcing their engagement at his parent’s annual rodeo?

Jessica is doing a good job of ignoring her doubts until Mark Fripp, the boy she fell in love with ten years ago, shows up on his motorcycle to fulfill his mother’s dying wish. What really happened when he disappeared from her life? What secret is he hiding for fear that she won’t accept him for who he is? And will she still be able to move forward with the life she has planned, even after she knows the trut

Travis Neighbor Ward was born and raised in Cambridge, Massachusetts. She graduated with an M.A. and B.A. in English literature and Creative Writing from the University of Pennsylvania. She moved to Florence, Italy, for five years before writing LIVING, STUDYING AND WORKING IN ITALY. Since then she has worked in New York City and Atlanta as an award-winning magazine editor-in-chief and writer. She lives in Atlanta with her husband and two daughters. She is the author of the novels COME FIND ME (Available on Kindle Now! Available as a paperback on April 15, 2014) and THE UNIFIED THEORY OF LOVE AND EVERYTHING (June 1, 2014).

I read about the U.S. Air Force Pararescuemen, and how brave they are (and how difficult it is to become one). I wondered what would happen if a man like this was broken and decided to track down his first love.