You are here: Products Colorado Promise by Charlene Whitman 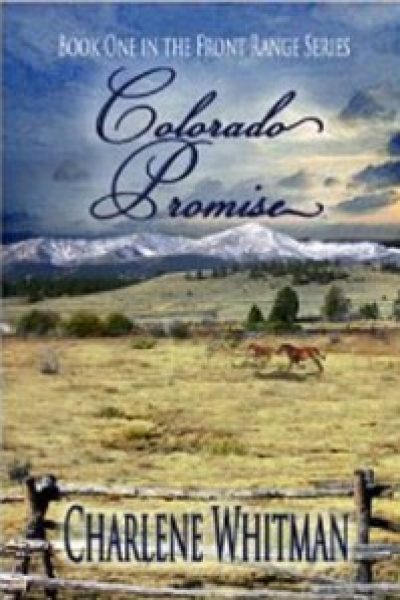 . . . but to Emma it is a desert prison in the middle of a hostile and dusty prairie. Emma had hoped to go to Vassar College, to pursue her dreams of becoming a botanical illustrator. But when her father, struck with “Western fever” moves the family out West, Emma’s dreams are shattered. Her only consolation is that her childhood friend, handsome Randall Turnbull, has moved to Greeley to work for his railroad baron father. Her heart sparked by his comforting presence, she hopes Randall will fall in love with her and marry her.

. . . as Lucas Rawlings, veterinarian and horse lover, well knows. Lucas has lived on the Front Range for three years at Sarah Banks’s horse ranch, after stumbling down from the Rockies consumed with grief. Since losing his precious wife and baby in childbirth, he doesn’t think his heart can bear ever loving again. But Sarah, a half-Cheyenne with a medicine woman for a grandmother, has a vision showing it’s time Lucas married again. He scoffs until he rescues Emma in a sudden hailstorm and their lives become intricately entwined.

Emma must choose—and fight—for the man she loves, at the risk of all she loves . . .

Emma yearns for the comfort and familiarity of Randall’s company, but Lucas’s easy confidence and gentle ways snag her heart. Facing a new life beset by grasshoppers, drought, and blizzards is hard enough. But when murderous ranchers try to force Sarah off her land, and her brother takes up dangerous company, the lives of her family and the man she’s come to love are threatened. It will take a miracle—and the strength and promises of true love—to come through unscathed in this untamed land.

Charlene Whitman spent many years living on Colorado’s Front Range. She grew up riding and raising horses, and loves to read, write, and hike the mountains. She attended Colorado State University in Fort Collins as an English major. She has two daughters and is married to George “Dix” Whitman, her love of thirty years. Colorado Promise is her first Historical Western Romance novel and Colorado Hope the second installment in the series.