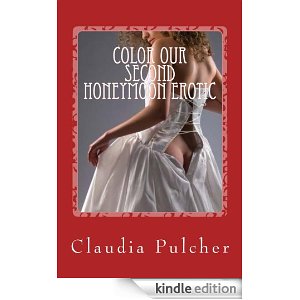 Brand new! Now published for the first time, the story that 200,000 readers cheered-on as it posted chapter by chapter on Literotica.

And a reader wrote: “They do it! They do it as millions of men and women, finding themselves in once-wonderful sexual relationships that no longer make the heart race, have longed to do it: They face every fear, take every risk, to set loose their fantasies!”

All of it comes alive with Claudia Pulcher’s exquisitely sensual style, high-definition imagination, humor, and unfailing insight into love as well as lust.

I wrote it. But you don’t have to get much further than the first chapter to understand why I decided to us a pen name.

We don’t think anyone has to do what we did to light a match to the fuse of their marriage and watch the fireworks. In fact, you can learn from us. And everyone’s fantasies will be different–but just as exciting!

“I want some real excitement in our relationship,” said Guy evenly. “I want the best damn second honeymoon, for us, any couple ever had. And the stuff you’re talking about is only the initiation, one evening. After that, everyone’s equal. Come on, Leslie, I never saw anyone walking around with scars, you know. And, for that matter, no one even ran to the police.”
“Well, what is anyone going to say? I asked to join some wild sex club, but at the initiation they were mean to me? So go arrest them? You want your customers at the security firm to read about that? Or my kids at the school? How about my mom, your dad? Once you’re in, you’ve got nothing to say.”
“These are people who live in our town, who see us every day. For God’s sake, Leslie, you’re as hot as anyone. I can’t even keep up with you. Look at that thing you bought for last New Year’s Eve.”
“With you, I want to be hot! With you, everything is okay.”
“I’ll be there, for you.”
“So will Shelley. I don’t know what she thinks about most, what she’d like to do with you or to me.”
“Well, you’re going to be getting a lot of interest and admiration out of this. You’ve got the body of a sixteen-year-old—everyone says so.” It was true, Leslie had the body of gymnast, all long lines and firm curves. Guy never could convince her that at the club she was the envy of the big-boob contingent, who, nearing 40, now, were hanging and swinging like bell clappers. Leslie’s high, tight, perfectly curved breasts barely trembled when she jumped. They were oddly mesmerizing, with big, dark, full nipples of a girl twice her size; they had the puffy look of permanent arousal. To hell with Shelly-basketball-boobs.
* * *
“Okay,” said Guy. “Here we are.” He said it lightly, jauntily, hoping that Leslie’s silence on the drive over had not been the prelude to a rebellion against the whole scheme. He had pulled the car almost into the woods, at the far end of the parking area behind Bill Fitzgerald’s house. Strange, there was plenty of room in the lot, but Guy found himself almost hiding the car—as though passersby might spot it. There was no chance of that; Bill Fitzgerald’s huge, palatial home was set in its own park at the end of a road that climbed to the top of a hill overlooking Castle Harbor. Money bought privacy, and privacy obviously was what Bill Fitzgerald wanted. Now, Guy understood why, although Bill was very cordial with Guy through work, Bill had never invited Guy and Leslie to his home. Well, now he had.
Guy knew why no other cars were there. Bill had told him to arrive early. Initiation of new members was a ritual. The novitiates had to be prepared—in mind and body. “You’ve got to tell, Leslie,” Bill had said. “You asked to join us, and do so voluntarily, absolutely of your own choice. But once the initiation begins, there’s no backing out. The point of it is to push you to the edge. You can say “start,” but if you say “stop,” no one will listen to you. So tell, Leslie—get it up front.”
He had told her, choosing the moment carefully, when they were spending a lazy Sunday morning in bed, Leslie already aroused, and, typically, becoming a little frantic with passion. Guy had been rubbing his fingers, very slowly, over her wet sex—too slowly, for Leslie. She was beginning to squeeze her legs together, arch her hips, wriggling in a mounting desire. Guy had said, “All our lovemaking is going to be like this, and much, much better, now. There aren’t going to be any limits. No putting a cap on your passions.” He rubbed her still more slowly, to her obvious frustration. With a nervous motion, she reached out and grabbed him—much more than a handful, for her; he lived up to the image of the big, well-hung football quarterback. He said: “No limits to fulfillment. You know, when we get initiated next Saturday night, we put ourselves entirely in their hands; we say “go!” and they take it away. All right?”
He rubbed even more slowly, awaiting her response. “Why are we talking about it now?” she said. It was a half moan, half gasp. She squeezed his package frantically, shaking it. “Can you do me?”
“I wanted you to know,” he said soothingly. “I’m very excited, right at this moment, and this is the way I want it for us—always. Like a permanent honeymoon. So, is it all right?”
“Yes, I’ve agreed, haven’t I?” She snapped, gasping. She heaved her hips toward him to press herself into his hand. “Harder!” she ordered.
Guy pushed her flat, swung a leg over her, and lifted her slim legs, pushing them back toward her shoulders. His prick went in easily; she was very wet. With slow, increasingly hard thrusts, he jolted her little body back and forth. Her fingers had crept down between her legs, and were working the clitoris. And then she was coming, crying out so loudly that he might