You are here: Products College Tour by Cammie Cummins 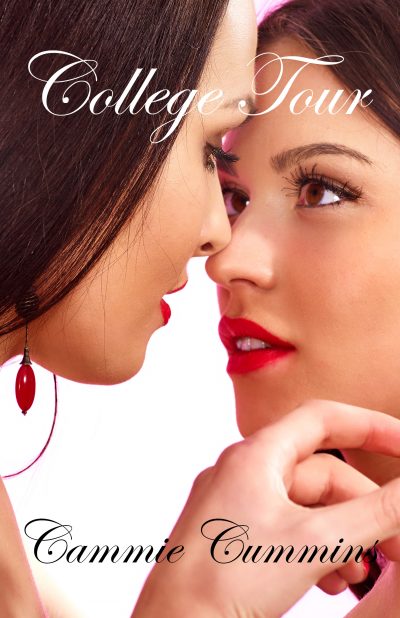 When Meredith’s Wall Street hedge fund boyfriend asks her to take his daughter, Phoebe, on her college tours because he can’t be bothered, Meredith grabs his credit card and jumps at the chance. But when she catches Phoebe in a compromising situation, rather than scold the girl for bad behavior, Meredith decides to jump in and give the girl a tour of how to really satisfy a man, while taking their own relationship to whole new level.

So not only did I not retreat and leave them alone, I stepped into the room and closed the door behind me and flipped the lock shut. “When I went to college, we hung a tie or a bra on the doorknob so people knew not to disturb us.”
“Meredith, I…” Phoebe giggled nervously. She clasped her hands together and tucked them between her legs and squeezed her boobs together with her upper arms like she was cold. The two of them sat like two peas in a pod with their backs against the headboard, like little kids caught doing something they shouldn’t have been doing. “What are you doing here?”
“We had dinner plans. Remember?”
“Oh, yeah. I, um, must have lost track of time.”
“I’d say.”
“Is this your mom?” Brad asked, so nervous he stammered. He cupped his still hard package in his pants with both hands and looked appropriately embarrassed. The telltale lump under the denim didn’t go away.
“What? No,” Phoebe said. “She’s just dating my Dad.”
“Oh.” Sounding relieved, Brad shifted his legs toward the edge of the bed, starting to get up. “I think I better leave.”
“Not so fast.” I said, putting a hand out. Stop sign fashion. “Brad, is it?”
“Yes, ma’am.”
I struck a pose, hitching my hip to one side, hoping I looked intimidating. I crossed one arm over my stomach, below my breasts, and planted my other elbow on my arm. I cupped my cheek, giving him a look that suggested I was contemplating what to do about all this.
Which, I was. I flicked my own long brown hair from my face and continued to scrutinize the two young people. “Is this typical of how you conduct your college tours, Brad?”
“No. not at all. I mean I’ve never done anything like this before.”
“Really?” I crossed the room and folded one leg under me as I sat down on the edge of the bed. “You’re a senior here, Brad?”
He gave me elevator eyes. “Yes.”
A thrill went through me as I recognized a look of approval in his eyes. “And how long have you been doing these tours?”
“Three years now.”
And in all that time you never did this before. This is the very first time ever?”
Brad’s face turned red and he looked away.
I shook my head, disappointed. “See, Phoebe. Men are all the same. They say whatever they think you want to hear just so they can get you into bed and take advantage of you.”
“But, Meredith. This was my idea.”
“I’m sure it was, sweetie.” I looked Brad over, finishing by gazing at his package. “And I can see why. He’s handsome and he’s got a good size—”
“You saw it?” he asked horrified.
“Hard to miss,” I said with a mischievous smile. “But the real question, young man, is why are you still hard?”
“Meredith!” Phoebe shouted, shocked. Her cheeks were almost as red as Brad’s. “Oh my God. I can’t believe this.”
“I’m not trying to embarrass you, dear. I’m just saying.” I had trouble taking my eyes off Brad’s crotch. He noticed and started rubbing it. Oh, you nasty boy, I thought with an inward smile even as I pretended outrage. “What do you think you’re you doing, young man?”
“Nothing,” He said, fake innocence dripping from the word.
Was he trying to seduce me? I had to give him points for trying. Most young men his age would have turned tail and run. But Brad, he had balls. Blue balls at the moment, but balls all the same. Phoebe noticed too and her mouth dropped open.
“Oh my God.”
We both also noticed he hadn’t properly fastened his jeans from when I first burst in on them and now his cock popped up between his hands. It was a thing of beauty, I have to say. And maybe I thought so even more so as, I’ll admit, since Phoebe’s dad and I were in a bit of a dry spell at the moment. Brad tried to stuff his uncooperative package back into his pants, but the horse was out of the barn as they say and my bad judge leaped into high gear as I reached out and cupped a hand over his, stopping him.
“Don’t.” I brushed his hands away and fisted his stiff cock. Warm and hard. Brad tried to backpedal across the bed, but by then I had a hand on his situation, still moist from Phoebe’s blowjob.
“Meredith!” Phoebe shouted. “What are you doing?”
“I don’t know,” I said, lying. “I thought maybe I could give you a few pointers.”
“By giving him a hand job?”
“For starters. Why not? But if you rather, why stop there?”