You are here: Products Cold Moon (A New World #5) by Tonya Coffey 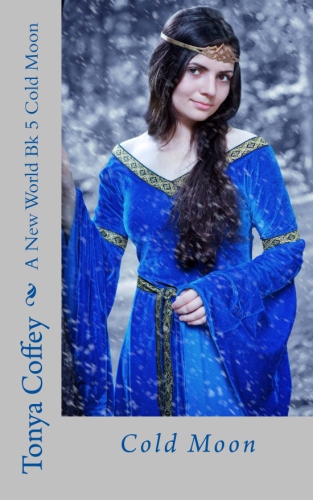 At last the king and queen of Ancients have emerged. Plans are in place for a new world, for all realms to be connected under one decree—an Elemental rule.
Jessa and Micha stand before the kingdom as one, the way it was meant to be. Yet in the distance, a demon lurks, waiting to rip their happiness apart once and for all. Even though they are surrounded by the people they love, who love them, the storm grows. With it, the realization the future may be darker than they planned.
Will Jessa and Micha get their happily ever after or will a demon, from the human world, take the True Power for himself?

Tonya grew up in a small town in Kentucky where she lives with her husband and two teen boys. Together, they motivate her to be the best at whatever she faces. If she isn't writing or reading a fantasy novel with lots of action, you will find her sitting in front of a canvas, painting the landscape which is so abundant around her home.

This series was inspired by a dream of a flower. Ladyslippers are my favorite flower but I am allergic to them. For years, I've tried to find them in the woods around my house. Before I had this dream, I found a bunch of pink ladyslippers growing on the property that we own. It was fate and the stories began.

I couldn’t believe my eyes.
The sky past the main gates, and just outside the village, rolled and bellowed with a black fog. A wind seemed to blow from the heavens and nowhere else. It was as if the sky was a beast and the wind was its breath, moving the darkness through the air. Out of its mouth flew softball sized fireballs that slammed into the structures with a force of hundred men.
My eyes widened at the monster that soared toward us, me. The people in the village ran, screaming out for someone to help them. My feet felt heavy as if they were stone. I couldn’t move. The fear I had rushed through my veins. It was as if each beat of my heart sent ice throughout my body, freezing me like a statue.
“My Lady,” Cara called, as she pulled her bow and nocked an arrow.
Tara followed her movements. “The people,” she called next.
My eyes swept the town. My heart beat into my throat. What do I do? It was as if I’d never faced evil before. My mind went blank and I didn’t know what to do or how to act.
The cloud inched closer to us. Wind erupted from the form and out of the darkened hole, fireballs flew toward me. One more time, a ball skidded past, nicking a column before it exploded into the side of the stone behind me. I winced and instantly put one arm around my belly as I bent to protect myself.
My eyes narrowed, as I stood face to face with the cloud. As I stared at it, I realized it was more than a fog. The blackness was a swarm of locus. They worked as one to create the dragon-like beast in the sky. The balls of fire were dozens of insects rolled into a single shape. The fire was the magick that made the bugs do what the wielder wanted.
As the cries of the people built and the swarm blackened the village, my panic grew. I wanted to help them, to protect everyone even the insect’s who were being used as pawns in the war I was flung into. No one was safe from Wellington’s anger.
My head swam as if I were ready to fly from my body, to see a vision. I took a breath, hoping my spirit didn’t slide from my form hopeful I stayed grounded. If it did, I would be laying on the stone steps useless. The beast would win and I couldn’t let that happen. Not after everything I had been through.
The power I’d used so many times worked through my body. I felt the magick invade my blood, work through my veins and pour from my skin. I didn’t know how it happened. I just knew for the first time, in a long time, I could wield the magick I’d had when I first came to the realms. My heartbeat pushed the power throughout my figure.
I lifted my hands. A blue beam shot from my fingertips out into the cloud of locus. An eruption shook the earth as my power connected with the magick of the controlled beast.
My power worked through the cloud, blue swirls rotated through the black as if a snake weaved through the mass. Around and around it moved, while I held my arms steady and wield the evil away. My feet slid in the dust that covered the stone from the force of our combined magick working against one another. Yet I stood strong.
I dug deeper, hoping I could manage to release the protection shield that used to be a single thought. My insides ached, feeling as if I were about to vomit. The urge fueled me, and with it, my magick grew. The shield erupted around the kingdom as if it were a glass bubble, similar to the field. The people stopped running and screaming. The stood, staring up at the massive cloud that my magick fought against. Locus swarmed against the top of the shield, splattering against the glass. The people watched, unafraid of what unfolded before them.
Blue and orange entangled in a duel in the sky. The colors pulsated until a second explosion burst across the heavens. Small remnants of orange flames fell from the cloud and the locus disbanded, fleeing from the fight.
My breath came hard and fast as I lowered my arms, watching the insects fly from the village. The blackened cloud faded away into the blue. The shield lowered with the threat that retreated. I felt proud as the people began to cheer. Cara and Tara stood proudly next to me with empty quivers. What surprised me more was the ghostly figure of a dark-haired little girl who stood next to me, holding my hand.