You are here: Products Cold, Hard & Heartless by MV Ellis 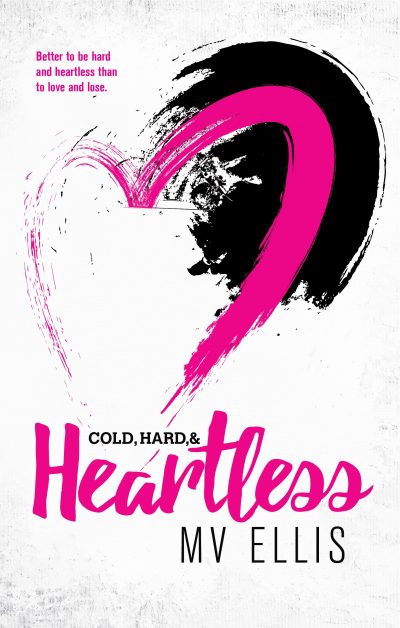 He vowed to protect the broken shards of his heart, until she etched herself on his soul.

Billionaire rocker Arlo Jones is Cold, Hard, and Heartless, and he’s all yours in MV Ellis’s latest novella. Get up close and personal as he learns to live, love, and give a fuck.

And if I don’t expose my heart, it can’t get broken.

As a boy, Arlo Jones learned that hearts could literally be broken. His shattered into a thousand tiny pieces when his dad died, and he vowed to never let that happen again. He had to be cold, hard, and heartless.

Until London. Meeting her is the start of something big, like the first bump of coke or hit of the pipe. From day one, the only way forward is deeper in, and there is no easy way out.

If this is love, he’s never going to be the same again.

MV ELLIS knows what it’s like to fall head over heels in love with a badass musician. She followed her heart halfway around the world to be with one. She moved from London to Sydney after a steamy holiday romance with a sexy bass player in sultry Brazil.
Twelve years, two children and a dog later, and she’s still smitten. All this with a guy she sat next to on a bus for 36 hours! She has toured internationally as a ‘WAG’, and her experiences inspire her writing.
Ellis’ love of romance began when she was 11 years old, after a summer spent secretly reading her auntie’s books. She’s been a sucker for an alpha hero and strong heroine ever since.
An avid reader, Ellis always knew that she’d write a book of her own one day. She was right about that. Following a career spanning advertising, marketing, and social media, she finally wrote Catching London in 2017.

I received so much amazing feedback after the release of my debut novel, Catching London, much of which mentioned that people would love to see and know more about the alpha male rock god protagonist, Arlo Jones.

By popular demand, this book gives us an insight into Arlo's thoughts, feelings and motivations through the events that unfold in Catching London, which is written from London's point of view. Written solely from Arlo's point of view, Cold, Hard & Heartless really helps us understand Arlo better. He's by no means a simple guy – he has carried the demons of his childhood into his adult life, making him not always the easiest person to love, but beneath it all, we learn he has a heart of gold

Fuck cancer. The thought dominated my mind while asleep and while awake. I could hardly think of anything else. The last thing I thought before my head hit the pillow, and the first thing when I pried my heavy lids open again. Although, in reality, I hardly slept at all. Not that I didn’t chase those Z’s, because I did, but I’d go to bed, and sleep would slide away from me like sand slipping through my fingers. If I was lucky I would go under, only to be called back to consciousness by the nightmares.

Fuck cancer. I lifted open the garage door and was met by four pairs of angry eyes. Luke, Stevie, Jake, and Ryan all looked at me as though I was cancer. So I was half an hour late to the first ever rehearsal of the band I’d pulled together. So what? It’s not like any of those losers had anything better to do anyway. And really, we weren’t a band yet, just a group of guys who kind of liked to play and sing. They all needed to take a chill pill.

Fuck cancer. My father’s body had been rotting in the ground for two weeks, and I needed something else to focus on before I lost my fucking mind. Giving this band a try was better than the other legal options available, and less likely to give our mom a heart attack than the illegal things I had in mind. Besides, girls loved guys in bands. Anything that helped me get laid was high on my list of things to do. Not that I needed help in that area, but there was no such thing as too much pussy, right?

Fuck cancer. We argued for weeks about what to call our band of not-so-merry men. Ninety-nine percent of the suggestions were so lame I wanted to pull the plug on the whole thing. Because how could I possibly make music with guys who thought those things were even remotely cool? If Luke had his way, we’d be called Conspiracy Theory; Stevie put forward Yoshi & Peach; Jake’s vote went to Aural Combat, and Ryan suggested Mic Drop. Not even close.

Fuck cancer. I walked out of band rehearsal and straight into Marnie. I guessed she’d been waiting for me, as she so often did. I asked her what she wanted. She seemed surprised, and stared at the ground, following the movement of her toe as she traced patterns with a pebble in the dirt. She opened and closed her mouth. I knew what she wanted, and today I wanted it too. I was thinking and feeling things I wanted to block out. I needed a distraction.

I looked into her jet-black doe eyes, and figured she’d do nicely. I crashed my lips down to hers and waited. She yielded, opening her mouth, letting me invade it with my tongue. When my dick was as hard as it had ever been and she was squirming against me, anxious with need, I led her by the hand to my room. Heartless by name. Heartless by nature.

Cancer could eat a giant bag of festering dicks all the way to hell and back.

Be the first to review “Cold, Hard & Heartless by MV Ellis” Cancel reply