You are here: Products Code: Revelation by Boris Sanders 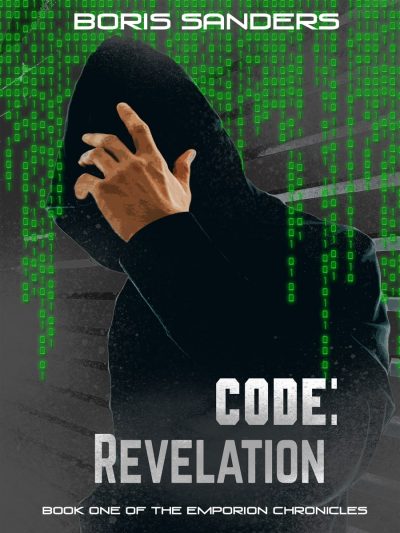 Introverted computer scientist Maximilian Gutenberg had no intention of acquiring a crystal with a being trapped inside, especially not one with the power to save— or destroy—humanity.

Her name is Lucy, and she cannot escape her prison until her mission is complete. A mission she keeps secret from everyone, even Max.

But she needs his help.

To gain his trust, she offers to get rid of his abusive boss in one week, and get him that promotion he always wanted. She’ll make him the hero of his own life, a man worthy of recognition, in exchange for helping her complete her mission.

This could be the opportunity of Max’s life, but he can’t help but wonder if Lucy is as good as she seems… And exactly what mission she must complete to regain her freedom.

Set in a dystopian, futuristic city built miles into the sky, “CODE: Revelation” is a powerful, psychological thrill ride that calls into question the nature of good and evil, and the importance of taking control of your own destiny.

Boris Sanders began writing at a very early age, so much so that, to his mother’s surprise, the doctor who delivered him insisted having seen some marks that resembled words inside her womb. His intellect is quite advanced, having learned 37 languages by the age of 14, of which 35 were created by him, don’t have a written form, and are only spoken and understood by him. In addition, he has a photographic memory, as long as an actual photo was taken at the time.

In his spare time Boris likes to swim in waterless pools and investigate the mysteries of the universe, while sitting on his comfortable couch, effectively doing nothing. He has a particular taste for olives of any kind.

I wanted to write a story that was different from the rest. I like psychological thrillers since watching Death Note, when it launched, so I decided to venture on this road too. First I created the world, I was trying to imagine a Sci-fi city that was different from all the others portrayed on similar books, after that, the rest came bit by bit. My corporate background certainly played a part on it.

Be the first to review “Code: Revelation by Boris Sanders” Cancel reply