You are here: Products Cockney: A Stepbrother Romance by Aubrey Irons 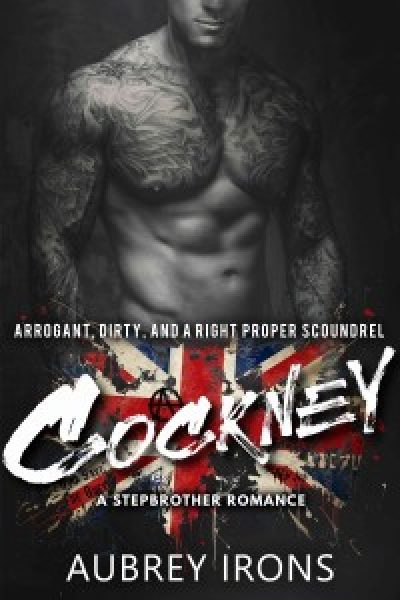 London’s hottest new bad boy chef is a panty-dropper. He burns his way through party girls’ bedrooms as fast as he blazes around his military-precision kitchen.

He’s a face from my past I never thought I’d see again. The tattooed smooth-talking British exchange student from five years past. The one who brought me in like a moth to flame for one night of firsts… before he left me behind forever.

The one who almost had my v-card.

Except he’s not in my past anymore. Now I’m stepping off a plane in London to start my new job in his kitchen. London, where we’re moving because my mother is marrying his father.

Yeah, not just my boss. That smug, arrogant jerk is about to be my stepbrother.

He might be all grown up now – gorgeous and demanding and wildly successful. But what happens when the man who never hears no comes up against the one woman who won’t take his bullsh*t? The one that won’t submit.

I mean, I can’t, right? That would be so wrong.

I think I’m in big trouble.

In the real world, Aubrey is kept plenty entertained by her own tattooed Marine husband, their precocious and adorable three year old, and one very ill-behaved puppy.

I had so much fun writing the book before this one – “Crude” – which also happened to be my first Stepbrother romance, that I had to write another one. I’m also a huge Anglophile and amateur chef, so combining a.) bad boy, b.) London, and c.) cooking into one steamy book was a no-brainer!

“We just can’t do this,” she whispers quietly.
“I don’t see why not.”
She shoots me a look, “Seriously?” She shakes her head, “Oliver, I told you, it’s not like I don’t want us to be friends-“
“I don’t.”
She stumbles. “Excuse me?”
And right then, something inside snaps. It’s like saying it cements all the roaring, rambling thoughts I’ve had inside my head for the past week; hell, since she stepped off that fucking plane. Whatever it is, it’s like a switch being flicked, and the rest of world drops away except for her and me, standing in the raining London afternoon.
And I know right then, I’m not letting another fucking second tick by without doing something about this.
I grab her by the arm and drag her as she gasps around the corner to the alley beside the restaurant. Instantly, I’m pushing her up against the brick wall behind her, my eyes wild as my gaze burns fire right into her eyes.
“I said I DON’T,” I say gruffly, holding her by both her wrists against the wall. “I don’t want to be your friend, or your buddy, or your fucking pal, Chloe.”
And the second I say it, even I’m wondering what it means. What do I want to be with this girl?
But she throws that look right back at me; that fiery, defiant look filled with heat and power, but also this sort of scared tenderness behind it that just slays me. And just for a second – just for the briefest second – her lip trembles just a hair, as if giving testament to that scared girl behind this defiant mask of sass and attitude.
And it’s my undoing.
My mouth crashes against hers, hard. I push my whole body against hers as I grab her head in my hands and kiss her with everything I have; everything single thing I’ve been holding back. I’m hungry for her as I sear my lips to hers, heedless of whatever consequences this may bring.
And we’re frozen, just like that, for a single moment in time; a single second of just two people stopped in the flow of time. Just as we begin to unfreeze – just as the world is about to keep on spinning under our feet – I know she’s about to push me away, or slap me, or yell, or all three of the above, and that’ll be the end of it. After that, I’ll have my final verdict, and I’ll be done with this whole bloody thing.
Except, she doesn’t push me away, and she doesn’t slap me, or yell at me.
She fucking moans.
And it’s like unleashing the animal inside of me.
I growl into her kiss as we open our lips, tongues sliding against the other. Breaths come in halting gasps as we lose ourselves to each other. I’m pressing her up hard against the wall, and she’s rolling her hips against me, bringing her fucking knee up to my waists and hooking her leg around me as if to pull me even tighter against her. We break the kiss, gasping as we pull back for a second, eyes darting around the other’s and our breathing coming ragged before we go crashing right back into it.
I’m fucking lost in those lips; dropping out of all sense of time or space or any other fucking issue in the world. Because nothing else matters in that moment but those perfect, pouty lips pressed against my own.
“Oliver,” she gasps, pulling away for a second before pressing her lips back to mine, kissing me hungrily, “I- I-“
“I want you,” I growl, bringing my mouth to her neck and biting the skin there, hard. “I wanna bend you over right here, yank those jeans down over that sweet ass, pull your panties to the side and bury my face in your pussy.”
She moans, her breath hitching and her hands clutching at my back as I rasp the words into her ears. I can feel her hips undulate against me.
“And then I want to slide every single inch of my cock inside of you, and fuck you like you need to be fucked,” I hiss the words into her ear, my hand coming up cup her breast through her shirt. I run my thumb across a hard nipple I can feel right through the material. “And I’m not gonna stop until I hear you screaming my name.”
She groans and cranes her neck to bite at my ear as she pulls me hard against her.
“I want to know what your face looks like when you come, Chloe.“

Be the first to review “Cockney: A Stepbrother Romance by Aubrey Irons” Cancel reply