You are here: Products Close Liaisons (The Krinar Chronicles: Volume 1) by Anna Zaires 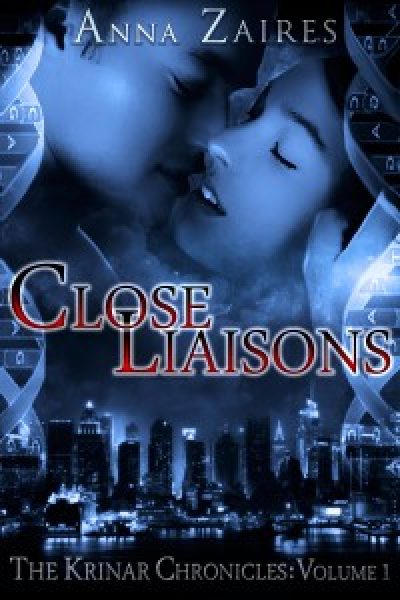 In the near future, the Krinar rule the Earth. An advanced race from another galaxy, they are still a mystery to us—and we are completely at their mercy.

Shy and innocent, Mia Stalis is a college student in New York City who has led a very normal life. Like most people, she’s never had any interactions with the invaders—until one fateful day in the park changes everything. Having caught Korum’s eye, she must now contend with a powerful, dangerously seductive Krinar who wants to possess her and will stop at nothing to make her his own.

How far would you go to regain your freedom? How much would you sacrifice to help your people? What choice will you make when you begin to fall for your enemy?

Breathe, Mia, breathe. Somewhere in the back of her mind, a small rational voice kept repeating those words. That same oddly objective part of her noted his symmetrical face structure, with golden skin stretched tightly over high cheekbones and a firm jaw. Pictures and videos of Ks that she’d seen had hardly done them justice. Standing no more than thirty feet away, the creature was simply stunning.
As she continued staring at him, still frozen in place, he straightened and began walking toward her. Or rather stalking toward her, she thought stupidly, as his every movement reminded her of a jungle cat sinuously approaching a gazelle. All the while, his eyes never left hers. As he approached, she could make out individual yellow flecks in his light golden eyes and the thick long lashes surrounding them.
She watched in horrified disbelief as he sat down on her bench, less than two feet away from her, and smiled, showing white even teeth. No fangs, she noted with some functioning part of her brain. Not even a hint of them. That used to be another myth about them, like their supposed abhorrence of the sun.
“What’s your name?” The creature practically purred the question at her. His voice was low and smooth, completely unaccented. His nostrils flared slightly, as though inhaling her scent.
“Um . . .” Mia swallowed nervously. “M-Mia.”
“Mia,” he repeated slowly, seemingly savoring her name. “Mia what?”
“Mia Stalis.” Oh crap, why did he want to know her name? Why was he here, talking to her? In general, what was he doing in Central Park, so far away from any of the K Centers? Breathe, Mia, breathe.
“Relax, Mia Stalis.” His smile got wider, exposing a dimple in his left cheek. A dimple? Ks had dimples? “Have you never encountered one of us before?”
“No, I haven’t.” Mia exhaled sharply, realizing that she was holding her breath. She was proud that her voice didn’t sound as shaky as she felt. Should she ask? Did she want to know?
She gathered her courage. “What, um—” Another swallow. “What do you want from me?”
“For now, conversation.” He looked like he was about to laugh at her, those gold eyes crinkling slightly at the corners.
Strangely, that pissed her off enough to take the edge off her fear. If there was anything Mia hated, it was being laughed at. With her short, skinny stature and a general lack of social skills that came from an awkward teenage phase involving every girl’s nightmare of braces, frizzy hair, and glasses, Mia had more than enough experience being the butt of someone’s joke.
She lifted her chin belligerently. “Okay, then, what is your name?”
“It’s Korum.”
“Just Korum?”
“We don’t really have last names, not the way you do. My full name is much longer, but you wouldn’t be able to pronounce it if I told you.”
Okay, that was interesting. She now remembered reading something like that in The New York Times. So far, so good. Her legs had nearly stopped shaking, and her breathing was returning to normal. Maybe, just maybe, she would get out of this alive. This conversation business seemed safe enough, although the way he kept staring at her with those unblinking yellowish eyes was unnerving. She decided to keep him talking.
“What are you doing here, Korum?”
“I just told you, making conversation with you, Mia.” His voice again held a hint of laughter.
Frustrated, Mia blew out her breath. “I meant, what are you doing here in Central Park? In New York City in general?”
He smiled again, cocking his head slightly to the side. “Maybe I’m hoping to meet a pretty curly-haired girl.”
Okay, enough was enough. He was clearly toying with her. Now that she could think a little again, she realized that they were in the middle of Central Park, in full view of about a gazillion spectators. She surreptitiously glanced around to confirm that. Yep, sure enough, although people were obviously steering clear of her bench and its otherworldly occupant, there were a number of brave souls staring their way from further up the path. A couple were even cautiously filming them with their wristwatch cameras. If the K tried anything with her, it would be on YouTube in the blink of an eye, and he had to know it. Of course, he may or may not care about that.
Still, going on the assumption that since she’d never come across any videos of K assaults on college students in the middle of Central Park, she was relatively safe, Mia cautiously reached for her laptop and lifted it to stuff it back into her backpack.
“Let me help you with that, Mia—”
And before she could blink, she felt him take her heavy laptop from her suddenly boneless fingers, gently brushing against her knuckles in the process. A sensation similar to a mild electric shock shot through Mia at his touch, leaving her nerve endings tingling in its wake.
Reaching for her backpack, he carefully put away the laptop in a smooth, sinuous motion. “There you go, all better now.”
Oh God, he had touched her. Maybe her theory about the safety of public locations was bogus. She felt her breathing speeding up again, and her heart rate was probably well into the anaerobic zone at this point.
“I have to go now . . . Bye!”
How she managed to squeeze out those words without hyperventilating, she would never know. Grabbing the strap of the backpack he’d just put down, she jumped to her feet, noting somewhere in the back of her mind that her earlier paralysis seemed to be gone.
“Bye, Mia. I will see you later.” His softly mocking voice carried in the clear spring air as she took off, nearly running in her haste to get away.

Be the first to review “Close Liaisons (The Krinar Chronicles: Volume 1) by Anna Zaires” Cancel reply