You are here: Products Claiming Her by Kris Kennedy 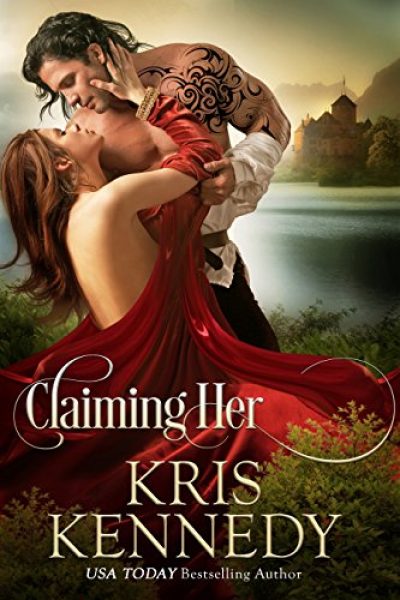 Claiming Her by Kris Kennedy

She's an English lady who knows her duty to the Crown. He's a disreputable, dishonorable and sinfully handsome Irish warlord. When honor and passion collide, who will win their test of wills?

NOT WHAT SHE WANTS…

Katarina of Rardove has safeguarded the Irish barony for England with audacity and sheer will for seven years, bending to no man. But when the worst of the Irish warlords breaches the impenetrable castle walls through trickery, he threatens her personal wall of cool reserve as well.

Aodh Mac Con the most formidable man she's ever met, but the deeper danger of this Irish scoundrel is that only Aodh can see—and appreciate—the deepest, most hidden parts of her. Only Aodh can unleash her secret passions.

Can she stand firm, or will she fall too–straight into his arms?

NOT WHAT HE EXPECTS…

Aodh Mac Con, The Hound, is through serving the English Crown and waiting to be granted the barony he sees as his birthright. After taking control of the remote castle with his bold men, he turns his attention on Katarina, intending to conquer the cool, reserved chatelaine as he's done everything else in his life: by making her bend to his irresistible will.

Can he conquer her in time, before the armies of England come marching, or will the fire that fuels her defiance put everything he's fought for in peril?

Kris Kennedy is a USA Today bestselling, award-winning historical romance author. Claiming Her is par of the renegdaes & Outlaws collection. The heroes are hard, the heroines capable, and the passion burns.

I love hard heroes on a mission, smart heroines who upend their plans, and big, sexy adventures.

…She shivered. “Why are you trying to win me, Aodh? Why does it matter so much?”
His hand slid to her waist. “My intent is not to win you.”
She stared up into eyes so blue it almost hurt to look into them. Blue like the sea, blue like blood under the skin. “Then what?”
“You are a fire that was almost extinguished, Katarina. And I need your flame.”
“Oh, Aodh, no.”
He tugged on their entwined fingers, guiding her forward as he backed up, leading her to the bed.
“This thing you want of me, Aodh, it almost ruined me. It destroyed my parents. I do not care if you need my fire; I do not need it,” she said, hoping he would save her from herself, because she was swiftly losing the fight.
He showed no mercy, just kept backing up, leading her forward like a wild creature, coaxing her to the secret truth of them: passion bound them in a fated way.
“I have spent my entire life trying to suppress that which you desire.”
“I know,” he said, and dropped onto the bed. As he went down, he pulled her with him. “I cannot let you do that.”
She lowered herself to straddle him, her other hand still closed around the prism.
He began unlacing the crisscrossing ribbons on the sides of her tunic. He swept the gown up over her head, so she was clad only in her chemise.
“This is wrong,” she whispered.
“I do not care for such things. I care only if it pleases you.” He tipped forward and touched his tongue to her breast, still covered by the soft linen. Her nipples peaked to gemstone hardness. His gaze swept up.
“Tell me, Katy, does that please you?”
A ragged cry broke from her lips.
He moved his mouth to her other breast, graced it with another hard stroke of his tongue through the thin linen shift. She curled her fingers into his hair.
“We are doomed if we do this thing.”
“Surrender to it.”
“Were I to do that, everything I am, everything I have, would be lost.”
“Maybe that is the very thing you need.” He lifted the chemise.
“Then I would have nothing.”
“You would have me.”
She gave a broken sob. “Don’t you see, you will destroy me?”
His hands stilled. “I vow it, I will not. Your heart knows.”
“What does my heart know?”
“Look where it has brought you. To me. Again.”
He was right. She was wrecked. “You will ruin me.”
“Get up, then, Katy. Get up and walk away.” His body was taut with restraint. “I’ll not stop you.”
Her thighs trembled from holding herself up above him. “I am locked in.”
“The door is not locked.”
“The castle is.”
“I’ll have you on a ship, to anywhere you wish. Just walk away.”
“You would…let me leave?”
“You must leave, Katy. You are mine, or you are gone. There is no other way.” His gaze was like a cord, a tether. She felt bonded to him by a single, shivering strand of sight.
“I do not want to leave,” she whispered.
“Good. Then let us begin.”
Begin. How like him, to word it so. Everything about him felt like the edge of the cliff. Irrevocable, life-changing.
He cupped her face and claimed her with a kiss.
It was an openmouthed, unforgiving, conquest of a kiss, his hands holding her face, pulling her down to him. She returned it with full ardor, their tongues tangling. They paused only when he leaned her back with a muttered instruction, so he could sweep the chemise up over her head and fling it away. Then she was naked before him.
He made a dark sound of approval. Cool air washed over her breasts and no matter that she’d been bared to him once before, the urge to hide was the strongest thing in her. It came to the fore, and she began to cover herself.
“No, Katy. Not anymore. I want to see you.”
He took her wrists and gently lifted them, parting her arms, holding them up in the air, stretched out wide, so he could stare at her body.
The breath burst from her. She closed her eyes, unable to withstand the force of desire she saw in him. For she knew it was in her too.
“I’m going to take you now.” Threat, promise, warning, it was all those things, and her body felt as if he’d strung her up on bolts of lightning. “Hard and deep.” Her wrists hung in his hands as he leaned forward and flicked his tongue across her breast. “I’m not going to stop.” He grazed her with his teeth, and her head dropped forward. “Until you’re laid out, tossing your head and crying my name.” His gaze swept up. “And then I’m going to take you harder.”