You are here: Products Claimed by the Elven King: Part One by Cristina Rayne 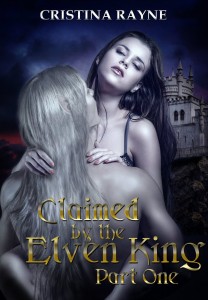 Claimed by the Elven King: Part One by Cristina Rayne

For Emily Ford, being awakened in the dead of night by what seems to be the very shadows in her bedroom come to life is the least of her worries as she is spirited away to become the new wife of an elven king for the purpose of bearing his heirs. Entranced despite herself by his ethereal beauty, Emily surrenders willingly to his seduction and is introduced to a new world of sexual pleasures she had not thought possible outside of a dream.

But can a human ever really win the heart of an elf or have a place within the elven court, especially when the biggest obstacle to both is her new husband’s barren and resentful queen who makes no qualms about wanting Emily gone and, if the whispers within the court are to be believed, is prepared to do the unspeakable to make it happen?

Cristina Rayne lives in West Texas with her crazy cat and about a dozen bookcases full of fantasy worlds and steamy romances. She also has a degree in Computer Science which totally qualifies her to write romances. As Fantasy is her first love, she feels if she can inject a little love into the fantastical, along with a few steamy scenes, then all the better.

I love fantasy and steamy romance, so I wanted to write a story that incorporated both equally rather than one being just a subset of the other.

I couldn’t think; my mind was so hazy that his words flowed through my awareness like a whisper in the distance. Somewhere in the back of my mind, I knew that he had done something to me. I wasn’t sure if it was intentional or something that was just a part of his elven nature, but I knew I would have been seriously freaking out about my current position without it. Even if the elf had fuzzed my mind out a bit to make things easier for me, not knowing what was going on at all wasn’t something I would ever want.
This is a dream, anyway, so what does it matter? my mind offered up with a mental equivalent of a shrug, and for some stupid reason, at that moment, I really believed it.
“I don’t want to forget anything,” I murmured, and just like that, my mind cleared so completely that I finally was able to appreciate the fact that he was looming over me, yards of golden hair spilling down to tickle my face and neck, as large, beautiful, and majestic as an angel.
“I did not expect this either,” he said, sounding delighted.
He then proceeded to open my robe-like garment until my breasts were revealed. It took every ounce of self-control I had within me not to cover myself out of shyness; yet, I couldn’t look away from the intensity of the eyes I could barely see in the darkness, either.
I felt the fingertips of one hand slowly, teasingly glide up my stomach until those same fingers curved around my right breast and squeezed playfully. However, instead of feeling aroused, I felt an almost overwhelming terror course through me. Although I’d had a handful of boyfriends over the years, this wasn’t something I had ever really done—lying so utterly bared and submissive to my partner, never mind be comfortable with any of them to even consider sex. I knew that all I had to do was ask for oblivion and the elf would grant my request, but for some inexplicable reason, despite my fear, I also felt that I would die if he stopped or I lost this experience.
I closed my eyes tightly. Something definitely had come loose in my brain during the last few minutes…
But then I felt the rose petal-like skin of his full lips firmly cover mine again, and the terror simply ceased. I hesitantly raised my hands and tangled my fingers in his hair, the delicate strands softer than even silk, feeling almost like water flowing through my fingers. I felt him smile against my lips, and that simple gesture made me shudder with pleasure.
I was careful not to touch his ears. I don’t know why, but something about them made me feel that touching them without his permission was a big no-no, the equivalent of it being taboo for a stranger to grab a random woman’s boobs or a man’s crotch. Considering what we were doing right now and the inevitable sex that would follow, it was a stupid thing for me to worry about, but I felt I shouldn’t do it all the same.
I could feel his thumb brushing lightly over my nipple over and over until it hardened. I moaned involuntarily and squirmed a bit as he teased the sensitive nub while devouring my lips as if they were a delectable meal and he had not eaten in months.
It was then that I became keenly aware of the weight of his body over me—and that he was completely nude. Where one of my hands had been tightly gripping a handful of cloth at his shoulder, my fingers were now digging into soft, bare flesh. When had he taken off his clothes? I couldn’t remember a time he had paused long enough to remove anything.

Be the first to review “Claimed by the Elven King: Part One by Cristina Rayne” Cancel reply