You are here: Products Christmas Pets and Kisses 2 by Annamaria Bazi 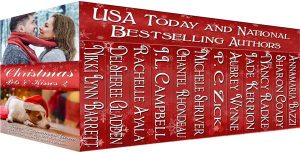 As authors we’ve come together because we enjoy writing sweet romances and love animals. The combination of Christmas with pets had great success last year; therefore, we are back with a second round of sweet romances that take place around the holidays and involves a pet.

The 12 fantastic authors of Christmas Pets & Kisses 2 have joined forces to bring you a wonderful collection this year. Some are returning from last year’s Christmas Pets & Kisses 1, and a few are new faces to our group. These authors spend their time lost in their stories and spending time with their characters. Several are mothers, working hard to make a magical Christmas season for their kiddos when they aren’t writing. Most have day jobs like everyone else but can’t wait to get to their laptops and to write! They hail from all over the United States and Canada, and love romance and happily ever afters. Check them out and fall in love today!
Individual Book Descriptions:
It’s Always Something- Nikki Lynn Barrett
It’s hard to be a celebrity couple in the spotlight. All Quinn and Tucker McGinnis want to do is spend their first holiday season together, but it’s always something keeping them apart.
The Oblivious Girl’s Handbook- DelSheree Gladden
Being oblivious to all the signs that your life is about to fall apart doesn’t stop it from happening to Sara Taylor. Alone except for the cat her boyfriend left behind to teach her a lesson, Sara has no clue how to survive on her own. Will her friend Monroe step in to help?.
Her Christmas Chance- Rachelle Ayala
When a persistent cat keeps breaking into Chance Martin’s workshop, he isn’t prepared to meet his reclusive owner–a woman with more than a face to hide.
Sold!- J.L. Campbell
Christmas looks dismal this year for Feechi Anoduro, until she meets Carsten Raimes, who brings not only good luck, but the chance for her seven year old to keep Max, his beloved Yorkshire terrier.
Unexpected Gift 2- Chantel Rhondeau
Housekeeper Dani Johnson is nursing a broken heart, so flees across the country to hide out in New York. Certain even Christmas festivities can’t thaw her frozen heart, Dani is in for a shock when she meets the local veterinarian technician and his adorable kittens.
Home for the Holidays- Michele Shriver
Her personal and professional life in shambles, New York lawyer Melanie Holister returns home to small town Iowa for the holidays, where she crosses paths with her high school crush Kaeden McGrath.
Merry Mountain Christmas- P.C. Zick
Fran is adjusting after her husband’s death when her first love comes back to town upsetting her family and leading her to an inspiration that will change both of their lives.
Paper Love- Aubrey Wynne
Ian has pulled out all the stops to gain Joy’s trust. When a stray carrier pigeon appears on his deck, the bird and an origami obsession save the day.
Kindled- Jade Kerrion
An injured male ballet dancer returns home to recuperate, but his massage therapist is his former dance partner and the woman who broke his heart
A Christmas Snowstar- Nancy Radke
Two neighboring ranchers struggle to save a new-born foal from wolves in a blizzard, while becoming reacquainted after years of separation.
Melanie’s Christmas Gift- Sharon Coady
With Christmas approaching and a new baby on the way Melanie is not a happy little girl feeling the baby will take her place in her new step-mother’s heart.
A Miracle for Happiness- Annamaria Bazzi
Brian finds his second chance at love, but never bargained having to fight for his beloved Amelia’s life.