You are here: Products Child of Destiny by Annemarie Musawale 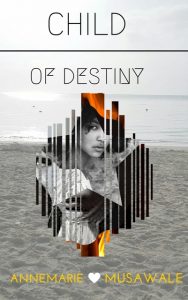 Child of Destiny by Annemarie Musawale

Annemarie is a homo sapiens sapiens sapiens. She has one devoted son who she sees when he has nothing better to do and a dog named Becky With the Good Hair. She enjoys reading fan fiction, watching Supernatural and Teen Wolf; and she’s a great fan of sleeping..

The story was rattling around in my head for months so I decided to put it on paper.