You are here: Products Cherry Ice by Melanie Amaline 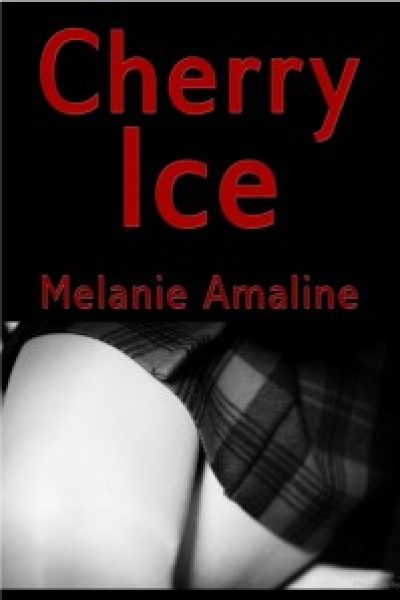 From the pages of Cherry Ice:

“I make a noise and wrap my arms around his neck. He smells like cherry cola and cinnamon. I can’t remember anything so sweet. His hand is running up my thigh and in between my legs.”

Cher and Jason may have found their one true love among the bottles and magazine racks of Freestate Deli and Lotto.

Melanie Amaline is an erotica author with a taste for the dark and the explicit. She is interested in writing fiction about sex, love, relationships, and difficult people.

My recollections of my late teens and early twenties–I remember the half-mad, shadowy quality of relationships at this age and the intensity of desire.

“Sally can’t ride no more,” Jason croons from his microphone. “Sally can’t ri-i-ide.”
I look over and he’s tipping the thing sideways like a rock star. I snatch it out of his hands. “Derrick isn’t going to be happy about the mess, Jay.”
His eyes go wide and doey in the dim fluorescent lights. “D’ya think it’ll be that bad?”
I smile and laugh.
Jason is my favorite co-worker. I look forward to seeing him every week. I used to do this when I got a crush on Kevin Faressi in tenth grade. I got up every morning two hours early and showered, make-upped, and dressed to the nines. I used to swing my legs in his direction and hope that someday, one day, he’d notice me. He never did.
Jason fills out a clipboard. I’m looking over his shoulder and trying to count the checkmarks. We’re required to fill in at least twelve per shift. The daytime crew tends to take all the easy jobs. “Jason,” I say, preparing myself for the ordeal of telling him I like him–before I lose this one, too. “I…”
I can’t do it.
In 1998, when I was a toddler, my mother used to work at this same gas station. It was called Shell back then, now it’s the Freestate Deli and Lotto. She recommended me for a job the day I turned eighteen, after I told her I wanted to wait to go to college. This town–I’ve been wanting to fly forever, but I’m just not ready to handle living on my own, yet. Also, Jason’s here.
He turns to me and grins. It’s like he knows. Or I’m paranoid. His hair is black as black can be and kind of dirty. He doesn’t smell, but it’s like it’s greased or something. He wears the striped button down we all have to–tucked in with the sleeves rolled up to make it look like a vest. He says, “Mind if I go out for a smoke break, Cher?”
I nod and say sure. I can’t take this anymore. Jesus in heaven, how the hell do I ask a boy out? I’m not a prude, right? Ugh.
I’ve never had sex. I should be clear about that up front. I had a boyfriend in high school but he was a whole lot less intelligent and interesting than I had thought he was at first. When we were making out in his car, he said, “Can I have a wedding ring?” and I freaked out. I walked home that night. That was the ruining of my first time. I don’t regret it.
One time, I gave a blow job to Michael Nicholson in the back of his pick-up. I hated it. Not because it tasted bad, but because he refused to call me the next day. Shit stings.
Jason is in front of the big plate glass window. He looks like a movie star from some long forgotten noir, lit up in the store lights like a Norman Rockwell painting. There’s even a diner across the street. I’m waiting for him to stub out his cigarette on the sidewalk and come back in. There aren’t any customers. There haven’t been for hours, now. The night shift was always so slow and long.
Jason comes in. I lean over the front counter, lifting up a little, and say, “Hey Jason, I wanted to ask–” God, this is so hard. “I wanted to ask if maybe you’d like to hang out someday. Not at work, I mean.”
He looks at me with his eyes narrowed. I’m not breathing. “Yeah, Cher. Sounds nice.”
I take in a big breath and smile. “Actually,” he adds, “d’you want to date?”
I can’t help but laugh quietly and nod. It’s so easy, isn’t it?
He holds out his hand and asks for the clipboard again. “Wanna help me move the soda crates to the back backroom?” he asks.
I’m riding high on our plans and nod without remembering what he said. He stalks off to the back and, in a minute, comes out with his eyebrows raised. “Are you coming?”
Hehe. I give a nervous laugh and rush back to him. He’s moving the crates already. “Okay, Crash and Fruitlin go in the next room. Poppop and Lion need to be in front. Snap–”
He stops and looks up at me. His face is underlit by the blue strip lights in the coolers to our left. It bounces off the underside of his bare arms and makes them look divine. He’s bent over the crates of Fruitlin and watching me. “Hey Cher?” he says. “I want to–”
He’s interrupted by the motors turning on. I move closer and he stands. He’s only an inch taller than me. Without warning, he wraps his arm around my waist and gives me a kiss on the mouth. His tongue slips between my lips. I feel something crashing inside of me, like I need to sit down. He pulls me closer and presses his hips against me. I can feel a bulging hardness in his pants. It makes me nearly faint.
“Cher,” he mumbles through his kissing mouth.
I make a noise and wrap my arms around his neck. He smells like cherry cola and cinnamon. I can’t remember anything so sweet. His hand is running up my thigh and in between my legs. A feeling like firecrackers opens up inside of me as he rubs back and forth over the seam in my crotch. I fall forward onto his chest and he holds me up. “Does this make it better?” he asks.