You are here: Products Cherries in Winter by Jeffrey G. Roberts 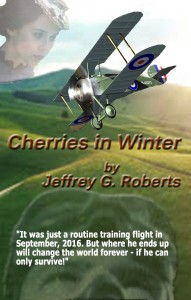 It has been said that the veil which separates the past from the present is not as immutable as one might think. Some have compared time to a spiral. But what if we could jump from spiral to spiral? A more terrifying thought: what if it accidentally happened? My science fiction/historical romance story CHERRIES IN WINTER, was inspired by two events that actually occurred- one at the turn of the last century, and one in the 1930’s. These are only two amongst many documented cases. But what if it could have happened again?

When an F-22 Raptor fighter pilot in 2016 is on a routine training mission with three other Raptors, he suddenly finds himself slammed by an unknown energy cloud. And when he regains control of his jet- he finds himself alone in the sky! All attempts at communication prove futile. But when his plane’s main computer inexplicably begins to seriously malfunction, he must land. And when he does, he realizes with horror that something is very wrong- as he touches down on a Royal Flying Corps airfield- in 1916! And the shattering paradox of a massive supersonic 21st century fighter next to tiny WW I biplanes, is the least of his problems. It is wartime. The dangers of the enemy becoming aware of an F-22 would be incalculable. How do you hide it? Keep it secret?

But then the unthinkable happens: while desperately trying to lay low, and find a way home- he falls in love. Now he must keep his true identity from her, he must make certain the Germans do not become aware of him, he must be careful not to do anything that might jeopardize the natural course of history, he must find a way back to 2016, plus now he must contemplate the impossible: how to return to the 21st century with the woman he loves- without her ageing 100 years!

Incredibly, he does. But with a twist he could not have imagined. For now they’re both strangers in a strange land.

I was born in New York City, and raised in NY and S. Florida. I attended Northern Arizona University, receiving a degree in writing. I have published several short stories in various magazines, and have 2 novels on Amazon: THE HEALER and CHERRIES IN WINTER. I reside in Tucson, Arizona.

My love of aviation, history, and the incredible strides we’ve made in 100 years. And then I wondered: what would happen if a fighter from 2016, through a supernatural fluke, appeared out of nowhere – in 1916! And what if the 21st century pilot made the terrible mistake of falling in love with an English girl from 100 years in the past! Now what?

CHERRIES IN WINTER
By
Jeffrey G. Roberts
She didn’t have a hint as to what was coming. No one on Earth could have. Particularly not in Dorking, England in 1916. A world in turmoil. A world at war. And the war was not going well for Great Britain. The United States would not enter the fight for another two years.
But 25-year old Evangeline Sunderland tried to force these concerns out of her mind this morning- if nothing else but for the sake of her sanity and peace of mind in these trying times.
The basket of her bicycle loaded with groceries, she pedaled across the English countryside toward home. High overhead a Spad VII biplane flew by on patrol.
“Poppa, I’m home,” she called out, as she began to put away the groceries.
Edward Sunderland walked into the tiny kitchen of their modest English cottage, and kissed his daughter on the cheek.
“While in the village, I noticed a newspaper article concerning the air war. It left me – concerned, father.”
“Don’t concern yourself over such things, Evangeline. Rumors fly about the pub. I’ve heard some of the chaps utter a few choice words here and there concerning a new aeroplane they’re building which should turn the tide against the Huns.”
“It shan’t be soon enough.”
“You know, that Lt. Hogarth has been asking about you.”
“Did he now, Poppa? My, my, now you not only run the Sopwith Pub, but a matrimony service as well. How inventive!”
“I’m only looking out for your welfare, my dear. And your happiness.”
“I know, Poppa.” And she returned the kiss on his cheek. “Dinner will be ready in about an hour.
“I’m so grateful you possess your mother’s culinary talents. How they eat what Ian prepares at the Pub, I’ll never know. You know, I noticed your dwarf cherry trees are looking particularly good. Your green thumb is remarkable.”
“Thank you, Poppa – on both counts. And I owe my “green thumb” to your ingenious makeshift greenhouse, and hot air from the house. I suppose you are inventive, after all.
I think I’ll check on the trees in the greenhouse.”
Her father had provided Evangeline a means to grow and cultivate her beloved dwarf cherry trees- a tiny makeshift greenhouse, with a pipe from the house to heat it. Her green thumb provided an emotional outlet for her fears, and a way to fill her lonely days with something she was good at, and loved. It was purposeful, and a source of pride. She began carefully cutting back selected branches with small pruning shears- until suddenly the blade slipped from her grasp. Evangeline let out a gasp of pain, as blood began dripping down her finger, and onto the leaves of the plant.

“Son-of-a-bitch!” Blood began oozing from Captain Drew Mitchell’s finger, as he gripped it in pain.
“Hey Einstein, you’re supposed to cut the steak, not the finger!” his friend taunted.
Culinary protocol was one of the more minor challenges at Malmstrom Air Force Base, in Great Falls, Montana, in 2016. Flying the Lockheed-Martin F-22 Raptor was definitely a major one. Captain Mitchell would not be seen in a blood-stained uniform for tomorrow’s training mission. He exited the Officers Mess Hall, and quickly returned home. His small on-base house was comfortable, and a perfect bachelor pad for the fastidious 32-year old fighter pilot; though incidents of female entertaining were few and far between for Captain Mitchell, unfortunately. Pictures and models of aircraft from the past hundred years adorned the modest two-bedroom home.
He attended to his bleeding finger, and then decided to open his tablet computer and go over the flight details for the next day’s training mission.
He had been studying for perhaps ten minutes when he heard a knock on the front door.
“Hey Einstein, how’s the finger?” one of his fellow pilots asked.
“I’ll live. To what do I owe the pleasure?” he asked sarcastically.
“We are here to escort you- forcibly if necessary- to La Bella Cantina, for a drink, and some oh well deserved female companionship.”
“Uh, guys, you do know we have a training flight at 1300 hours tomorrow? You remember: F-22 Raptor, big silver bird, about sixty-two feet long, around sixty-thousand pounds? You can’t miss ‘em.”
“It’s ok. We promised daddy we wouldn’t keep his little boy out too long. Come on, Drew! Get out once in a while, for crying out loud. When’s the last time you lifted your head from those flight manuals? Captain Mitchell, there’s more to life than combustion chamber igniters and snap rolls. There’s wine, women, and song! And- like gravity- that’s not just a good idea- it’s the law.”
Reluctantly, he agreed. Yes, Drew was lonely. But he tried to keep his priorities straight. It’s just that it was getting harder to do so, lately.
The restaurant was noisy and smoky; two things that Drew already detested. They found the table where the four young ladies were already waiting for them.
“You set me up, Captain!” Drew teased his friend, as they approached the girls.

Be the first to review “Cherries in Winter by Jeffrey G. Roberts” Cancel reply