You are here: Products Cheating to Survive by Christine Ardigo 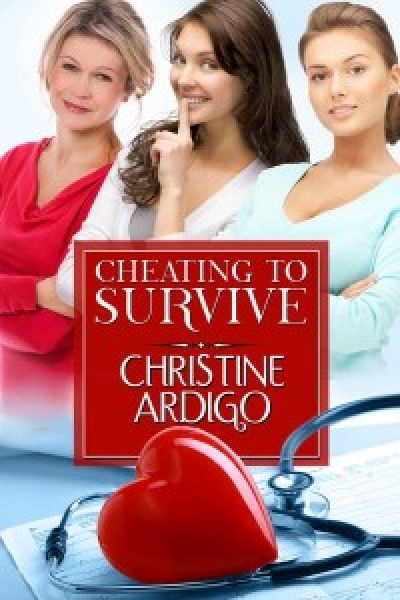 Cheating to Survive by Christine Ardigo

Can Cheating on Your Husband Bring Unimaginable Pleasure or Completely Destroy Your World?

To her three daughters, Heather is a fun-loving, silly mom. Her co-workers at Norlyn Plains Hospital think she has it all, including a handsome lawyer husband.

But when a flirtatious new doctor chooses Heather to spend his down time with, he reminds her of the man she regrettably gave up so many years before. Each interaction breathes new life into her and she gives in to the doctor’s seductions, threatening her fifteen year marriage.

Her co-workers Victoria and Catherine, are stunned by her actions, but when they see the positive transformation in Heather, and question their own crumbling marriages, they wonder if she has the right idea.

Can cheating on their husbands bring the three of them happiness? Or will they be destroyed by the consequences?

Meet Victoria…Heather…and Catherine, three dietitians working in the same hospital for a horrendous boss, and married to husbands anyone would want to strangle, dump in the trash, and watch the garbage truck pulverize along with the maggots.

His head sprang up and he leaned against the wall behind him, raising both his eyebrows this time. Stunned. “You mean if you and I were on a more personal level than it would be okay?”
“Of course, yes, I mean no, I think it would be something that if you and I were…” She squeezed her fist in between her thighs. “Well, we couldn’t anyway.”
“Why not?”
“We’re both married.”
“Is that a problem?”
Heather’s heart pounded so furiously against her chest she felt dizzy. She stared at him for a good fifteen seconds. “Your call,” she heaved out, her breathing rapid now.
He no longer inched toward her. Extensive thrusts propelled him across the room as if he had waited forever for her to say those words. Right before his chair knocked into hers, Silvatri leaped up, whipped it around in a half circle and crashed back into it, removing the obstructive backrest. He secured her cheekbones under his thumbs and drew her lips in to his.
His juicy mouth smashed onto hers, biting and sucking, like former lovers reunited. The feel of his powerful tongue against hers, was exactly as she imagined. She drove back wanting to climb inside. Silvatri’s right hand clutched the back of her head and clamped down on her hair. They say it’s in his kiss, and it was. Passionate and yearning, a deep desire concealed for months. There, in his kiss, she felt it.
Heather snagged it. A kiss. A tiny wish of hers, finally granted and her life took on new meaning. One kiss and hope restored.
But in one swooping motion, he removed his hands from her face, grabbed her ass and lifted Heather onto his lap. Heather froze. Only a kiss. His mouth covered hers again, but with each motion, she unraveled and let go. His commanding precedent erased the past fifteen years of faithfulness she maintained with Lance. She wanted him, wanted this.
She wrapped her arms around his neck. His hands traveled from her ass, down her skirt and back up her legs. His thumbs probed the tiny folds between her thigh and pelvic bones, teasing.
He glided his hands to the underside of her skirt and cupped her bare ass. He pulled away and they looked into each other’s eyes while their breaths poured out in quick successions. “Wasn’t expecting that,” he panted.
She smiled, hoping her face remained colorless. At least the thong she threw on this morning redeemed her lifeless mommy apparel.
He snapped up, hoisted her by her ass into the air like a small child, and took two large strides over to the wall, pushing her against it. Silvatri released her and then leaned in, rubbing his loose scrub pants against her body. She questioned if he wore underwear as his erection hung down across his thigh. The cucumber she cut for Rori’s snack yesterday entered her mind.
No. Not now. No kids!
He pulled away and staggered into the wall behind him, breathing as heavy as she. “How private is this office?”
He wouldn’t. Not here. Would he? Would she?
“No one knows I’m in here.” He looked at the door. “It’s locked,” she continued, “I’m the only one with the key.”