You are here: Products Chasing the Idol by Ivy Wild 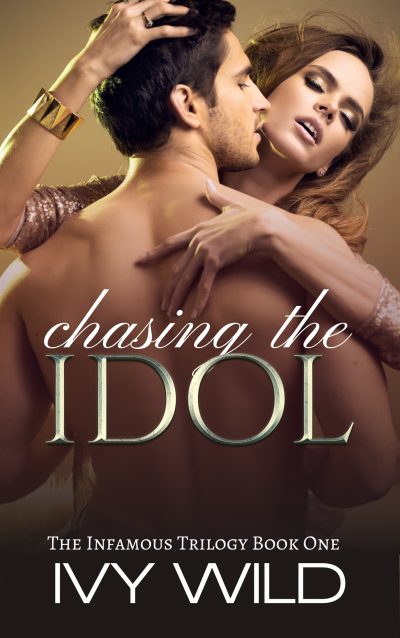 Chasing the Idol by Ivy Wild

I longed for her.
Even after all these years, I still wanted her.
Sophie Strong walked out of my life five years ago to become America’s next pop idol.
But everything didn’t go as planned.
And now she’s back in D.C.
Back within my reach.
I was just a kid when she left, but I built my fortune while she was gone.
I will have her, and she will come to me willingly.
This time, I’m not letting her go.

Chasing the Idol is the first book in the Infamous Trilogy

Ivy Wild never intentionally set out to be a romance novelist, but it is something she'll never regret diving into head on. A lover of all things green, wild and free, you can often find her reading or writing a book under a tree while trying to forget all of life's problems.

Since her emergence to the scene, Ivy has authored numerous short stories and a fantasy romance trilogy.

She currently lives with her own dominant alpha hero in various places of the world at various times.

She loves connecting with her readers over anything and everything.

Send her an email at [email protected]
ivywildauthor.com

Probably too many documentaries about pop stars coupled with watching the Fifty Shades of Gray trilogy in one go!

“So I just wasn't positive that I was thinking about the problem in the right context. Did you have any thoughts, professor?”

A flash of blonde hair caught Connor Driscoll’s eye, momentarily distracting him from the conversation he was having with a student.

“Yes, that sounds like a good idea,” he responded absently, not paying attention to what the girl was saying.
“Huh?” she huffed in a bit of annoyance.

“Please excuse me,” Connor said, dismissing himself from the conversation when he saw the woman begin walking away at a fast clip.

“But, professor!” the younger woman called out to him as he left her standing there by herself.

Connor began to pick up his pace as his intended target turned a corner and disappeared from his view. It had been several years since he’d seen the woman but even still, he thought for sure that it had been her.

He and Sophie had been close before she left for the west coast. And her departure had been so sudden they hadn’t even had the opportunity to say their proper farewells. Attempts to call her had gone unanswered until finally, her number had been disconnected. Connor had tried to avoid reading about her on the pop culture columns, but for those years, her face was on almost every magazine and her voice was on almost every radio station. Avoiding the hurt had been near impossible.

But all of that fell by the wayside when he caught a glimpse of her from across the square and he gave chase without a second thought.