You are here: Products Chasing Butterflies by Jennifer Labelle 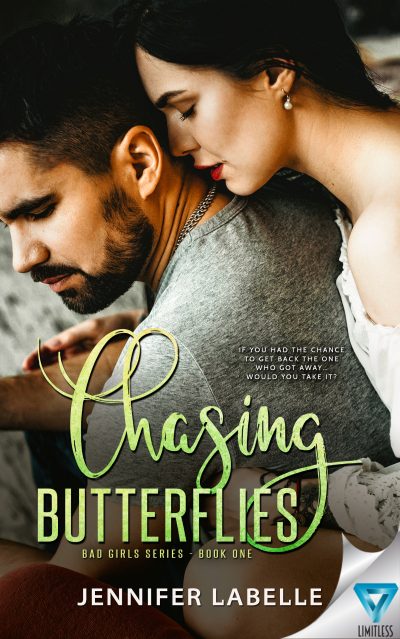 My life has been no joyride.
Eight years ago my sister and I decided to leave our home and drug addict parents behind to build a new life somewhere else. Now that I’ve found my passion in art and tattooing I’m convinced that we’re finally happy…until tragedy changes everything.
Deciding that going back to my roots is the best option for me, I return to the Hill Country of Texas, opening my own tattoo shop as a way to start over once again. One thing I didn’t count on…running into a blast from my past.
Jagger is more attractive than I remember. He’s all grown up, filling those jeans and cowboy boots with raw muscle and a whole lot of sexy. The problem is, I’ve been forced to guard my heart for so long I don’t know how to let someone in.
But Jagger makes it perfectly clear that he always gets what he wants.
And what he wants…is me.

Jennifer Labelle resides in Canada with her husband and three beautiful children. After her third child she became a stay at home mom. In her busy household Jennifer likes to spend her down time engrossed in the stories that she creates. She is an active reader of romance, mystery and anything paranormal. With an education in Addictions work she's decided to take a less stressful approach in life and hopes that you enjoy, as she shares some of her imagination with all of you.

“Whatever the reason you dragged me here, consider it your Christmas gift.” Sawyer Maddox grimaced as she fingered the lacey undergarment in front of her. Love was in the air and although she was extremely happy for her sister, it made Sawyer sick to be around Carley. It brought back way too many memories from a time she wished she could forget. Sewer, sewer, sewer… Sawyer cringed from the memory and quickly moved on. They’d already been to lunch, a shit ton of clothing stores because her sister needed to find the perfect outfit for her date tonight, and now they were stuck in an overpriced underwear shop. She couldn’t wait to leave. Ah, the things you do for family. She sighed.

“Don’t think I won’t take you up on that bi-atch.” Carley laughed and gave her a big hug.

“Did I say Christmas? I also meant birthday, too.” She smirked.

“Nice one, smart ass.” Her sister stuck out her tongue and laughed. “If you’re offering, then get out that credit card and follow me.” Carley grabbed a heaping pile of lace, satin, and seethrough thingies and Sawyer groaned as her sister dragged her to the fitting rooms lounge. It felt like torture while her sister tried on clothes and she impatiently waited in a chair just outside, twiddling her thumbs. Unlike some people, she hated to shop.

“So, seriously though, what’s the occasion for this sudden emergency girly crap—shopping spree we’ve got going on here?”

“You’ve been hanging out with Toby way too much lately,” her sister mumbled. “Sometimes I feel conflicted on whether that’s a good thing or a bad thing.” Toby James was Carley’s long-time beau, Sawyer’s mentor, and the best guy she’d ever met so far, and that was saying a lot. He’d make a great brother someday and she was genuinely happy her sister had found someone worthy for a change. It also didn’t hurt that he was a kickass tattoo artist and had taught Sawyer almost everything she knew about the art of skin canvassing.

“Whatever.” Sawyer rolled her eyes.

“He’s got something special planned later and I have a feeling he might propose.” She squealed in excitement. “I’m not absolutely sure or anything. It’s just a hunch. So keep your fingers crossed.”

“Wow, Carl. That’s big, honey.” Sawyer sat up and smiled. Her sister’s excitement was contagious and it made the whole day bearable suddenly. Sawyer hated shopping. “I’ve got everything crossed for you, if it means you’ll be happy.”

Carley opened the fitting room door holding up two scraps of sheer material. “Found it!” She held them up for inspection and closed the distance to embrace her again. “Thanks, Saw-saw. You’re like the daughter I never planned for but totally glad I got stuck with.” She sniffled and Sawyer laughed. It was a long-standing joke they shared when things became too mushy. Sadly, it was also the truth and Sawyer loved her for it more than words could express.

Carley Maddox was five years her senior, thirty to her now twenty-five years old and had been raising Sawyer since she could ever remember. Carley was the one who held the family together when their parents were too drunk or high to move, let alone take her to school or make sure they had food on the table. She was her rock; the only family she had that meant anything and the only one she’d do anything for and then some.

“Promise me you won’t always shut out love. I want you to have what I do someday. Toby brings out the best in me. To this day, even three years later, I swear I can still feel the butterflies in my stomach whenever I even think about him, let alone when I’m close to the man. And don’t roll your eyes at me.” She crossed her arms in admonishment and Sawyer fought her instinct to laugh by biting her bottom lip. “I know you’re young and having fun but mark my words, the one-night stands will get old and I don’t want to see you end up all alone. Do you hear me?”

“Yes, Mom. I hear you.” Sawyer saluted. “I’m fine, Carl. Now stop depressing yourself with my shit and hold onto those butterflies you just talked about.” She grabbed the flimsy lingerie from her sister’s hand and headed straight for the register knowing Carley would follow close behind.

Thinking back on that day, she remembered how she couldn’t wait for it to be over, so she could escape again in her art and tattoo designs. Although genuinely happy for Carley’s happiness, Sawyer was also envious and it pissed her off. Love, pffft… Never again. It just wasn’t in the cards for Sawyer. Of that, she was pretty sure.

If only she knew it would be the last good memory of being with her sister she’d ever have.

Things hadn’t turned out as Toby and Carley had planned that night. He’d proposed, all right, but instead of the blissful night it should have been, it turned out to be a clusterfuck of chaos, despair, and heartbreaking anguish for all. Carley died that night in an accidental fire caused by several candles that had been lit for ambiance. Toby was wracked with guilt for surviving when she hadn’t and Sawyer needed to run. So, run she did, to the one place she never thought she’d set roots in again…home.