You are here: Products Caught on Camera by Destiny Blaine 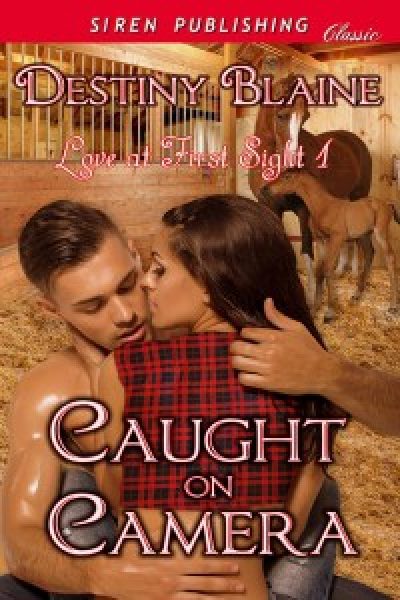 Caught on Camera by Destiny Blaine

Bailey Chapman isn’t looking for love, but when Nick Palmani shows up at a bonfire and starts pursuing her, she notices. Soon, the two are grinding out their passionate fantasies. Unbeknownst to the couple, the entire episode is caught on camera.

Nick Palmani knows Bailey possesses that special spark, but when he discovers Bailey’s father owns the farm where he’ll soon work, things are complicated. After a night of passion is caught on camera and the entire groping session goes viral, he isn’t too certain of his job security. He’s more concerned about Bailey and how her life will soon spin out of control.

Fearing Bailey will do whatever necessary to pacify her family and avoid unattractive labels, Nick whisks her away to an undisclosed location. Soon, secrets are revealed in front of an interested public and Bailey and Nick must decide if they can move forward together or find a way to leave their explosive past behind.

A career writer for over a decade, Destiny and her husband live in East Tennessee with their four pampered pets. For more information, follow Destiny on Twitter at www.Twitter.com/DestinyBlaine or Facebook at www.Facebook.com/DestinyBlaine.

I love reading love at first sight tales. Bailey’s and Nick’s chemistry was so strong at the start, the series title unfolded from the beginning. Since they were so caught up in their attraction, it seemed like a logical progression to have their first night of passion caught on camera. In today’s world, anything can be caught on camera and recorded clips can go viral in an instant. Sometimes ‘caught on tape’ affairs unfold as good reality drama and a great romance!

Cocksure, with plenty of attitude, he looked her over with that hardcore male appreciation in his expression. After a good once-over for the third or fourth time, his nostrils flared. His eyes turned misty. He tilted his head up and seemed to scent the air.
A slow smile crept across his lips. “I like your perfume. What is it?”
About that time, the wind kicked up a bit and it was hard to ignore where they were—right smack-dab in the middle of a working farm, one with well over a thousand head of cattle. “It’s a special blend, actually. I call it lilac-manure.” She tried her best to add a French accent to the last part.
“I haven’t heard of—” He stopped and laughed. “Cute.”
“I have no idea what it is. I dabbed on some of Stacy’s before we came out here tonight.”
“Do you come often?”
“Is that a loaded question?”
He chuckled. “If you’ve been paying attention, you know what I’m about to ask.”
“Go ahead.”
“Do you want it to be?”
“Oh boy,” she drawled, stroking her Southern accent for all it was worth. “Now we’re getting somewhere.”
“Seeing the light at the end of the tunnel, are you?”
“Something like that,” she said, uncomfortable as soon as she acknowledged the element of easy comfort she felt with this guy. Regrouping long enough to analyze their unexplainable connection, she decided there wasn’t anything wrong with an instant chemistry as long as she used it wisely. “So why didn’t you take a walk with the others? I took you for a skinny dipping man.”
“Ouch.” He groaned. “You’re striking below the belt there.”
She glanced down. She just couldn’t help herself.
He let her gawk all she wanted. Jerking suddenly, she searched his face and immediately noticed a certain level of amusement lingering in his expression. “You’ll do anything you can to draw attention to your lower half.”
“I’m not trying. Believe me.”
“I don’t.”
He nudged her with his shoulder. “Would you believe me if I told you I think you’re more interesting than skinny dipping?”
After seeing that big bulge in his denim? Yep, she’d buy that one all right.
“I’m not much for streaking, running to the water, and pretending not to notice all the naked bodies around me,” she said.
“Me either.” He winked. “I’d rather have a woman strip off for action than strip down for show.”
“You just keep coming with it, don’t you?”
“What?” He arched a brow and those slender dimples slid right up his cheek.
“It’s a saying. Kind of like, ‘you just never quit’ or—”
“I don’t.” His voice was throaty to the nines and the way he looked at her then left her body covered in goose bumps.
Her skin heated in all the right places. Her internal muscles tightened. Every cell in her body tingled with pure fire.
In the distance she could see a cluster of nude bodies running from the riverbank to the river. The high pitched squeals and laughter filled the air. The moon wasn’t high enough to light up the whole area, but it looked like there were at least twenty or more observers in addition to at least that many swimmers.
“Looks like the party moved down to the river.”
“I was hoping I could twist your arm and convince you to provide a grand tour of the property.”
“You’re just hoping to take advantage of me if I wander too far from the crowd.”
“You don’t strike me as someone who is easily taken advantage of.”
“How do I strike you?” She couldn’t help but ask. Here she was talking to the best looking guy at the party and she wanted to know why he was giving her more attention than anyone else. There were plenty of chicks there and most of them seemed to have their eyes on him.
“How do you strike me…let’s see…” He let his voice trail before he abruptly said, “As someone who would go broke trying to make a living by telling fortunes. That’s for sure.”
“Why’s that?” She laughed, kicking her feet out and crossing her ankles so she could swing her legs comfortably.
“Your reading of my past seemed inaccurate at best.”
“How far off was I?” She really wanted to know. She also couldn’t help but wonder. What was a good looking dude like this doing in Small Town USA without a ring on his hand or an arm ornament clinging to his bicep? Most men who looked like Nick were jackasses like Lawyer. They always had a pretty broad on their arm and one trailing behind waiting to take her place.
“You couldn’t handle my answers.” His eyes darkened and even the fields behind them seemed darker then, too. The clouds slipped over the moon and it might have been a perfectly romantic moment except some idiot in one of the jacked up trucks hit his lights and turned them on high beams.
“Try me,” she said, throwing her arm in front of her face and shielding her eyes from the bright lights.
He tented his right hand over his brow. At the same time, he locked his left arm around her waist and gave her a slight push, helping her down from the truck. “Come on. Let’s take a walk. I’ll tell you my secrets, if you tell me yours.”