You are here: Products Caught in the Middle by Daisy Grace 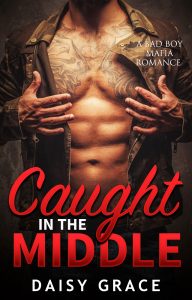 Caught in the Middle by Daisy Grace

When she’s not writing said books, she’s dreaming about the Christmas season and knitting cute little outfits for her dogs.

Like most girls, I have a love of sexy bad boys. I wanted to write a book that would leave the reader guessing until the end, not knowing who to trust.

‘Get. Out. The. Car.’ He whispered, spitting out every word with such a frightening vehemence, that Lucy stopped breathing altogether.
He leaned over her, brushing past her shaking thigh, and un-clipped her seat belt.
‘Out,’ he repeated, pushing the gun harder into her neck.
Lucy had never even seen a gun, fake or real until that moment. In her little village in Kent, the only weapons they saw were on the television – she had never even been pick-pocketed, let alone kidnapped at gunpoint.
She had enough common sense, however, to do exactly what this weapon wielding weirdo wanted her to and got out of the car. .He slammed her face forward onto the passenger door, and roughly kicked her legs apart, so that she was in the spread eagled position.
From behind, she cringed as she felt a firm hand run up her thigh, and pull out her mobile.
‘Fuck,’ He muttered, and Lucy turned around just in time to see him drop the phone to the gravelled floor and stamp on it. She flinched at the noise, but couldn’t help but notice what her driver/kidnapper looked like.
He was clearly a man of money. His suit was definitely tailored, handmade and expensive. As he ran a frustrated hand through his tousled hair, it fell back into place softly. Even as he scowled, his strong jaw and high cheek bones were prominent. He was unusual looking, intriguing, in fact.
Lucy felt embarrassed to be in his presence, so scruffy and disgusting. Although she could scrub up pretty well when she was hitting the clubs – she knew how to style her dark blonde hair, and her slim figure looked pretty good in a dress, she definitely didn’t class herself as beautiful.
Immediately she felt another pang of embarrassment for feeling like that – she’s just voluntarily let herself be kidnapped! She shouldn’t be feeling self-conscious when this could be the start of a horrific ordeal, for both her and her family.
After a moment of muttering to the trees, the man whipped round to face Lucy.
‘Turn around,’ he barked. As she did as she was told, she noticed that he had a thick Irish accent.
He pulled his gun out of his waistband. ‘Who are you, then? You with Joey? Huh?’
His icy eyes smouldered in anger. ‘You better start talking, bitch or I’ll blow your fucking head off of your shoulders and leave you here!’
Lucy realised, that up until that point, she didn’t know the meaning of true fear.
Her jelly legs couldn’t hold her up anymore, and when they collapsed underneath her, she fell to dusty floor, dizzy and losing her grip on her breathing.
Everything went grey. Her face was tingling from hyperventilating, and she couldn’t help the hot tears from dribbling down her face.
In her blindness, she felt two strong hands grab her under the armpits before she hit the ground entirely. They propped her against the back wheels of the car and gripped her shoulders.
‘Jesus Christ – breathe woman!’
‘I… I don’t know what’s going on,’ she managed to slur out, ‘please, please let me go, please don’t hurt me -‘
‘-woah, slow down there,’ the man interrupted her, gripping her shoulders even tighter. ‘Hurt you? Why on earth would I want to hurt you?’
Lucy blinked through her tears and tried to focus. She could hazily make out the face of her kidnapper, who had crouched down to be at her level. Once she could see, she really couldn’t believe how beautiful he was.
His strong jaw was cleanly shaven, and his dusky aftershave wafted up her nose. Up close, he looked a little bit older than she thought. Fine lines were forming round his eyes, his hairline dotted with tiny salt and pepper flecks.
Men who look like this aren’t kidnappers.