You are here: Products Caught in a Trap by Elaine Raco Chase 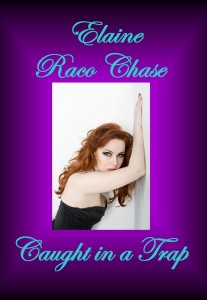 Caught in a Trap by Elaine Raco Chase

At least she thought she had!

Kit Forrester lived a life of lies – so what was one more? When her first vacation ever sank like the Titanic – she couldn’t tell her friends THAT! So she did what she always did – she lied.

And told everyone about her fabulous five day cruise. Her days of fun in the sun and moonlit nights with the man of her dreams – Rafe Morgan – tall, handsome, incredibly sexy and successful.

And well – now they were engaged!

Rafe Morgan did exist and he wanted answers.

Retired Navy SEAL and Texas business tycoon, Rafe Morgan was sure he was being set up by his suddenly acquired fiancée. He had spent 20 years in the Navy and was trained to handle anything – until he came up against one volatile New York redhead with wicked curves and the world’s hardest ass!

And then he saw her sex lair and was more than willing to be Caught in a Trap. And to set one of his own!

Content Warning: this book is intended for mature adult readers (18+) who are not offended by profanity and explicit sex scenes. While this is a romantic comedy, some readers may find some subject matter difficult to read – unfortunately such events are true.

Spoiler alert: please be advised that no comic books, superheroes, duct tape, handcuffs, ropes or chocolate milk were harmed during the writing of this novel.

Then I teamed my heroine with a hero who was suffering from PTSD….however…it’s a romantic comedy that brings harsh truths of today front and center by using humor

She refused to look at him and kept walking up and down the tiny apartment. “I’ve met men like you before, pushy and controlling. First, I’m type AB negative blood, with the emphasis on negative. So if you think you’re a modern day vampire, I am not on the menu so just forget about making me your beverage of choice.”
He shook his head and tried not to laugh. “Trust me, that won’t be a problem.” Kit’s pacing figure drew him like a magnet. The auburn braid kept hitting against her shoulder. Her thin white T-shirt was soaked with perspiration and plastered against her breasts. Even with a bra, Rafe could see the outline of her nipples, the hardened nubs pushing against the cotton. He took a deep breath and tried to focus on whatever the hell she was saying.
“And while you may like your women all submissive and cowering and calling you sir and wearing a collar or hanging from a rope or wearing fuzzy handcuffs and a blindfold or having a ball gag in their mouth – that won’t be happening. Don’t even think about nipple clamps or butt plugs or putting BenWa balls in any orifice. And you better not have a secret red walled, sound-proof room filled with assorted sex toys either.”
Rafe vaguely heard her talking nonsense because he was mesmerized by her frayed Daisy Dukes. Riley had been right, her shorts were dangerous. There was something about denim and the erotic juncture of her ass and upper thighs that was causing his stick and stones to engorge with both pleasure and pain. The crazy combination of damp T-shirt, cut-offs, and well-toned, long, tanned legs caused his internal temperature to reach the boiling point.
“I’ll pretend to be your fiancée,” Kit agreed, walking past him again, “but I’ll only be your vertical fiancée not a horizontal one.”
“Not a problem.” Rafe grabbed her shoulders, spun her around and pushed her back against the wall. “I do vertical.”